The World Health Organization (WHO) has characterized the double burden of malnutrition (DBM) as "the coexistence of undernutrition (i.e. micronutrient deficiencies, underweight, and childhood stunting and wasting), along with overweight and obesity, or diet-related noncommunicable diseases, within individuals, households and populations, and across the life course." These forms of malnutrition are no longer occurring in isolation, but frequently coexist in low- and middle-income country (LMIC) settings, signaling a nutritional epidemilogolical shift. Yet, the issue of DBM has experienced slow uptake in the nutrition discourse in LMICs (Popkin et al. 2020) until recently. With a new Lancet Series on the DBM (launched Dec 16, London), there is improved recognition that the DBM is "a new nutrition reality" in LMIC. The Lancet Series explores i) the dynamics of DBM, ii) its etiological pathways and consequences for health, iii) potential double-duty actions to address DBM through programmes and policies, and iv) the DBM's economic impact. 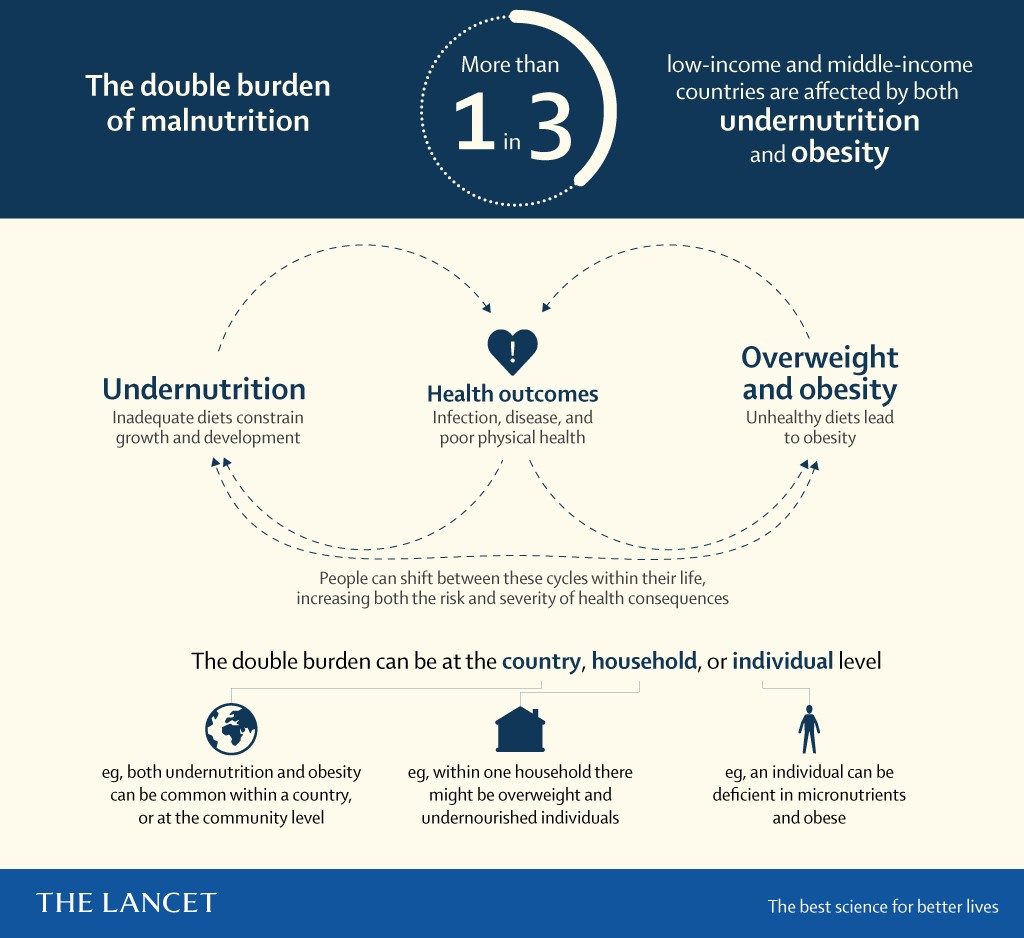 The dynamics of DBM in West Africa

The first paper in this series shows that more than a third of LMICs experience multiple forms of malnutrition, and is most prevalent in Sub-Saharan Africa, South Asia, East Asia, and the Pacific (Popkin et al.  2020). The nutritional situation in West Africa is not different as shown by various pieces of work on the dynamics of DBM across population groups in the region. A recent secondary data analysis by Transform Nutrition West Africa provides an overview of multiple forms of malnutrition present in the region among women of reproductive age (WRA) and children aged under five (U5) at population level. Using data from the Demographic and Health Surveys and the Multiple Indicator Cluster Surveys, Transform Nutrition West Africa reported on prevalence of low birth weight, U5 stunting, U5 and WRA anaemia, U5 and WRA overweight/obesity, U5 and WRA wasting. The analyses showed that 14 West African countries face multiple forms of malnutrition among children simultaneously. Guinea, Mali, Niger and Sierra Leone experience a quadruple burden of child malnutrition (anaemia, stunting, low birth weight and overweight). The most common double burden among WRA is anaemia and overweight (present in six countries). Some countries experience a triple burden of overweight, anaemia and wasting among WRA (Guinea, Gambia, Mali, Nigeria and Senegal). UNICEF’s 2019 edition of The State of the World’s Children report provides additional perspective on this rapidly evolving challenge for children in the region (see their regional profile for West and Central Africa).

For the adolescent population, a rapid systematic mapping review, aimed to identify relevant literature published on adolescent nutrition in West Africa over the past 20 years, showed that among the 154 studies retrieved, only 23% report on the issue of DBM. Nigeria, Senegal and Ghana represent the majority (92%) of the studies on the DBM on adolescents in the region. Most of the studies were observational in nature, except for one intervention on school feeding in Ghana. In addition, no research on policy was retrieved. Recent evidence from the region – as tracked by quarterly evidence searches by Transform Nutrition West Africa – shows that overweight and obesity among children and adolescents are a form of malnutrition that is now contributing to the DBM. Adom and colleagues’ (2019) review, Prevalence of overweight and obesity among African primary school learners: a systematic review and meta-analysis, presents overweight and obesity estimates from 45 studies (from 2003 to 2016), across 15 African countries, comprising respectively 92,379 and 89,468 primary school learners. Their results indicate that estimates, using the International Obesity Task Force (IOTF) cut-offs were 11.5% and 4% across these studies for overweight and obesity respectively. In general, these estimates were higher in urban, and private schools, but were similar across studies by gender, major geographic regions, publication year and sample size.

For a region heavily affected by multiple forms of malnutrition, across various population groups, it is crucial to better understand how these forms co-exist, what drives them, and how they can be effectively addressed.

To this end, Transform Nutrition West Africa is carrying out a spatial analysis to assess how multiple forms of malnutrition coexist in the same geographic locations, within the same individuals, and within mother-child pairs, as well as where DBM hot spots (i.e. an area that has higher prevalence level of a type of malnutrition compared to the expected prevalence level) are located.

Changing lifestyles and environments marked by, among other factors, rapidly changing dietary behavior is viewed as a major contribution to the DBM. Therefore, the recommendation of healthy diets for all, from infancy to adulthood, features heavily in the ten priority candidates for double-duty actions (Hawkes et al. 2020). A challenge for the West African region is the lack of knowledge about dietary behaviors and food environments in the context of malnutrition in all its forms. Two recent publications summarized below, as part of the Transform Nutrition West Africa evidence tracker, add to the evidence base and focus on snack consumption in young children and changing dietary behaviors in urban Africa.

Nordhagen and colleagues (2019) examined the consumption of commercially produced snack foods and beverages and showed that these feature in the diets of young children in West Africa, even among the youngest children and in rural areas. Dr. Nordhagen notes that "The relevance of these results for the double burden of malnutrition is twofold. First, these foods and drinks are typically dense in energy but not in micronutrients, so their consumption in excess quantities can lead to overweight/obesity (perhaps coexisting with micronutrient deficiency). While overweight/obesity is generally uncommon among children this young in West Africa, taste preferences and habits established at these ages can carry into adulthood, thereby increasing likelihood of overweight/obesity. Second, the consumption of these snack foods and beverages can (particularly for the youngest children, who have small stomachs) displace the consumption of other, more nutritious foods, leaving children at risk of undernutrition. This might increase their susceptibility to overweight/obesity later in life."

As well as the above cited evidence on dietary behavior in the region, a systematic review on the drivers of overweight and obesity provides insight on the situation in the wider African region. Ozodiegwu and colleagues (2019) performed a systematic review of qualitative studies that identifies likely drivers of overweight and obesity among adult women and adolescent girls. Dr. Ozodiegwu states that "Positive symbolism surrounding larger body sizes, migration, high cost of healthy food, lack of community recreational facilities, and ageism were important factors influencing the predominant large body size ideal, poor food choices and diminished leisure-time physical activity among adult women in Sub Saharan Africa. While similar factors, such as the high cost of healthy food, was a likely driver of overweight and obesity among adolescent girls, we found that peer pressure and the unhealthy food environment in secondary schools were also important unique influences on adiposity status in this study population." The review covers 17 studies, mostly conducted in South Africa with a few studies from Ghana, Botswana, and Kenya. This hampers generalization to the West African region as the authors confirm: "the extent to which it applies to sub-Saharan Africa, the West African region, and even to the countries within which the study was conducted, is unknown. This qualitative review though allows formulation of overweight and obesity research and intervention hypotheses that can be tested through field studies."

Stuart Gillespie, Transform Nutrition West Africa’s project leader, commented on the series, calling for the need to focus on political and commercial drivers of the DBM, including the important role that different forms of inequity play. IFPRI’s poverty, health, and nutrition division director, Marie Ruel, co-authored the third paper "Double-duty actions: seizing programme and policy opportunities to address malnutrition in all its forms"  in the Lancet series which focuses on the potential actions to respond to these multiple forms of malnutrition simultaneously. Both the paper and Marie Ruel’s blog on the paper iterate ten double duty actions that provide opportunities "to tackle malnutrition in all its forms, everywhere, and for all people, at all stages of the life course." No recent evidence on either of these two important topics is available for the region.

In conclusion, the recent evidence (as tracked quarterly by Transform Nutrition West Africa) coupled with the recent Lancet series, shows a promising trajectory for DBM research for the region, yet highlights that more needs to be done. Researchers, policymakers, donors and implementers in the region should focus on advancing the evidence on understanding what drives the DBM and the potential interventions appropriate to the West African context in order to act on addressing malnutrition in all its forms.

Reflections from a recent webinar where nutrition experts gathered to consider past learnings in an effort to to better face the impacts of COVID-19 on food systems and malnutrition in all its forms.

Read more
View all
Blog
December 18, 2020
What Influences Choices on Eating and Activity? Perspectives from Adolescent Girls and Women

Based on A4NH experience, reflections on how CGIAR can engage meaningfully with key country stakeholders to build momentum toward attaining development goals.