It is quite tempting to assume countries follow a linear path from one food system type to another, similar to the World Bank classification of economies by income level. If we could think of the food systems transformation path as linear, it makes a concept like a food systems index useful ― once a country reaches a threshold value of an index, it reaches a different status. For the World Bank classification, the type of lending a country is eligible for changes with the change in status. In the case of food systems transformation, one could envision types of aid eligibility, or the type of food systems policies that should be followed, could change.

If an index was relevant, we might need to improve upon the one linked above, as it only covers 97 countries and minimizes the importance of key food systems outcomes, including economic and social variables. Here, we examine a more balanced set of variables, meant to represent economic, social, dietary, and environmental outcomes, and do so visually, to examine whether there are clear linear patterns in data as countries move from one categorization to another. 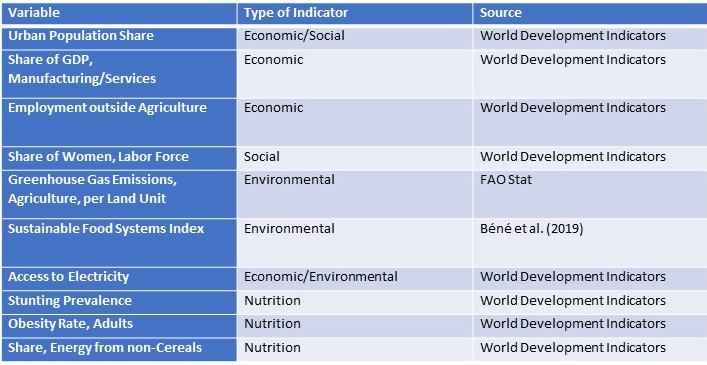 We place these ten variables in a recently developed food systems typology. It classifies countries into five types of national food systems, including OECD countries, using only four variables. We drop the fifth category since it almost exclusively includes OECD countries and combine the third and fourth categories to build a “modernizing and formalizing” category. We then select a few countries from the rural and traditional; informal and expanding; and modernizing and formalizing categories and illustrate these ten indicators on spider graphs below. 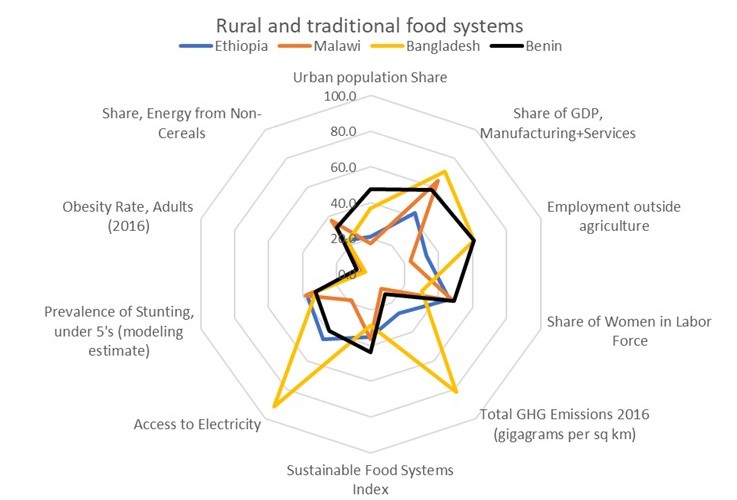 First, we examine the “rural and traditional” category. Three of the four selected countries are in Africa ― Ethiopia, Malawi, and Benin ― and we observe several similarities between them, relative to the fourth (Bangladesh). All have almost no obesity, a relatively high and similar stunting prevalence, and a low share of dietary energy from non-cereals. All of them have a relatively similar sustainable food systems index value; however, there is a substantial difference between the greenhouse gas (GHG) emissions per square kilometer from agriculture between the three African countries and Bangladesh, which partially reflects differences in fertilizer use in cropping. We also observe a large difference in employment outside agriculture, which is higher in Bangladesh and Benin than Ethiopia and Malawi. 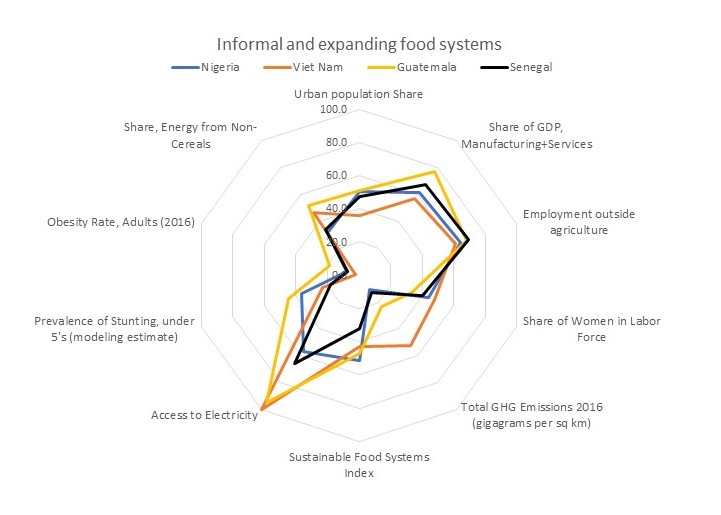 In next examining the “informal and expanding” category, we look at Nigeria, Viet Nam, Guatemala, and Senegal. We find some broad differences from the “rural and traditional” category, but also some substantial overlap. For example, Nigeria and Guatemala have high stunting rates, but they are low in Senegal and Viet Nam. Viet Nam and Guatemala have quite high rates of electricity access, while Nigeria and Senegal look like rural and traditional countries. The share of dietary energy from non-cereals seems higher, but also includes overlap; similarly, employment outside agriculture is higher but similar to Bangladesh from the “rural and traditional” category.  Importantly, there is overlap in the Sustainable Food Systems index, suggesting that a linear increase does not necessarily mean a different type of food system. 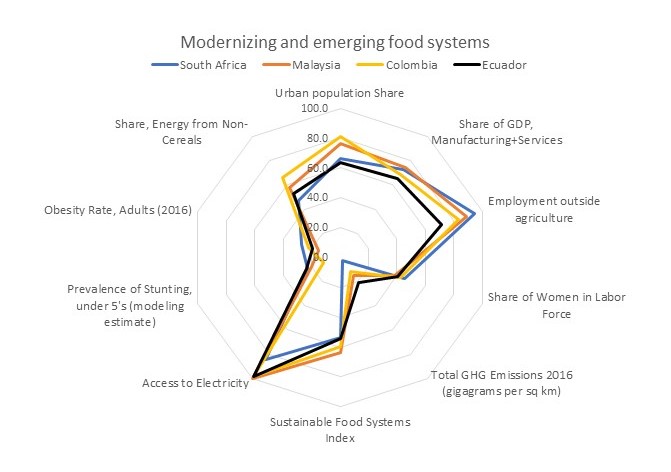 Finally, we again see overlap between categories with the “modernizing and emerging” category, including South Africa, Malaysia, Colombia, and Ecuador. Notably, all have relatively high obesity rates and access to electricity; they all have relatively high employment outside agriculture as well. But there is overlap in the dietary energy from non-cereals, in gross domestic product outside agriculture, and in GHG emissions per square kilometer, among others. So again, we do not see much evidence of linearity; rather, we see overlap in many of these indicators between the categories defined in the food systems typology we use here, but we suspect that would be true for any food systems typology.

Food systems transformation is leading to more complex food environments, longer value chains, and is reflected by higher employment outside agriculture. Yet the transformation process is not linear and therefore context is likely to matter a great deal when coming up with policies that should be recommended to governments as they try to manage this process toward better dietary and environmental outcomes. Even classifying countries into different types of food systems using fairly simplistic development indicators, we observe that there will be substantial differences between the transition process in Benin and that in Senegal, while Viet Nam’s food systems transformation will not necessarily follow Malaysia, to name two examples of pairs of countries that might be expected to have similarities. Understanding a country’s individual context, rather than assuming it will take a one-size-fits-all path, is crucial to ensuring appropriate policies, programs, and incentives are identified and implemented to support each country as their food systems transform.

Alan de Brauw is a Senior Research Fellow and Laura Leavens is a Research Analyst in the Markets, Trade, and Institutions Division at the International Food Policy Research Institute.