TRADE: GOOD OR BAD FOR THE SUSTAINABILITY OF OUR FOOD SYSTEM?

In a recent paper published in April in the international journal PLOSOne, a team of researchers revealed some interesting, and yet disturbing, findings. Funded under A4NH’s “Food Systems for Healthier Diets” research flagship, the group of researchers – which included fellows from The Alliance of Bioversity International and CIAT, John Hopkins University, the University of Denver and The University of California - Davis – were initially interested in exploring the dynamics of food systems. “What drives food systems and how can we measure or monitor them?” was the underlying question of the research.

To respond to that question, the group of researchers looked more specifically at the potential relationship between an index of food system sustainability they had calculated for almost 100 countries and a series of 20 potential drivers which are usually presented in the literature as “drivers of food systems.”

What their results reveal is informative, but also somewhat unsettling.

First, they found that among the key drivers usually assumed to affect our food systems, some are still not showing impact. A case in point is climate change. While the whole scientific community has now recognized that climate change is a key driver of many processes, data show that, so far, our food systems have managed to “buffer” this effect. The question, of course, is: “how long will the resilience of the systems be able to compensate for those climate change shocks?”

Second, they also found that among the key drivers that show statistical correlations with the level of sustainability of our food systems, the majority are negative. With the exception of trade flows in merchandise and services, the four other top drivers (population growth, agricultural area, female employment in services, and urban population) are all negatively associated with countries’ food system sustainability scores. This means that any further increase in those drivers is expected to be associated with a further decrease in the overall sustainability of our food systems.

That is bad news, especially when we realize that among those four drivers, three are closely related to the global demographic transition that is characterizing the world at the moment (population growth, urbanization, and change in lifestyle). It means those drivers are propelled by very strong inertia, which will be very difficult to curb or contain.

In this rather gloomy context, the only driver that seems to have a more positive effect on the level of sustainability of our food systems is... trade.

This result is probably going to cheer up experts and institutions for whom trade is the solution to many of our global problems (poverty, food insecurity, economic stagnation, etc.) while it will sound like an “aberration” to others who will ask, “how could international trade be a positive driver when we all learned that growing and buying fresh, local food is more sustainable than consuming imported, luxuriously-packaged food?”

Well… the answer is probably somewhere in the middle.

First, it is important to realize that importing foods is not necessarily always less sustainable or more environmentally detrimental than trying to grow them locally. Think of a food product that needs a lot of water, for instance. Clearly, some countries are less endowed with water resources than others. It would not make sense for Niger, for example, to try to start growing spinach to increase vitamin A intake among its bulging young population, and the reason for that is the whole system is more effective at producing spinach in Kenya (which ranks tenth among top spinach producing countries) than in Niger. Trade allows us to take the more sensible route.

Now, as the authors point out in the PLOS One paper, we all have also learned that when badly controlled and unregulated, “trade can also facilitate unhealthy dietary patterns and non-communicable diseases associated with nutritional transition” or even “increasing pressure on natural resources and subsequent environmental degradation.” And this exactly what their analysis seems to show (Figure A). 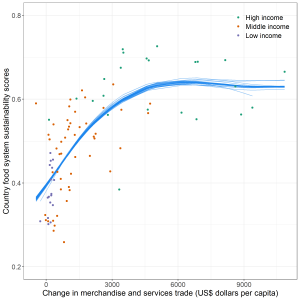 While the relation between trade and food system sustainability appears positive overall, it weakens substantially for the higher values of trade flows observed for higher-income countries. In other words, trade is good… but only up to a point.

Christophe Béné is a Senior Policy Expert in the Decision and Policy Analysis Program at the Alliance of Bioversity International and CIAT. He conducts work under A4NH's Food Systems for Healthier Diets flagship.