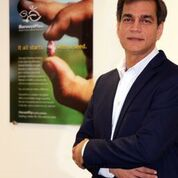 Arun Baral will be the next Chief Executive Officer of HarvestPlus, the global program has announced. Currently serving as CFO, Baral will lead HarvestPlus' work to address the serious nutrition and health impacts of micronutrient deficiencies in low- and middle-income countries by improving agriculture and food systems, according to a statement released by the program on May 1.

"We congratulate Arun Baral on his new position leading HarvestPlus," noted John McDermott, Director of the CGIAR Research Program on Agriculture for Nutrition and Health (A4NH). "HarvestPlus has taken on a great challenge as it pivots from its work generating long-term evidence about biofortification to supporting the delivery of biofortification at scale in very diverse countries and regions. We look forward to supporting Arun in his leadership of this effort."

Baral succeeds Howarth "Howdy" Bouis, who is retiring. Bouis, who founded HarvestPlus, received the World Food Prize in 2016 for his groundbreaking work in biofortification.