PAVING THE WAY TO COMMERCIALIZATION: THE ROLE OF STANDARDS FOR BIOFORTIFIED PRODUCTS

The WHO defines biofortification as “the process by which the nutritional quality of food crops is improved through agronomic practices, conventional plant breeding, or modern biotechnology. Biofortification differs from conventional fortification in that biofortification aims to increase nutrient levels in crops during plant growth rather than through manual means during processing of the crops.” In broad terms, biofortification can cover anything from increasing nutrients in animal feeds that improve the nutrient content of animal source foods such as eggs, milk and meat; genetic modification of rice to introduce a gene for vitamin A, or increasing the vitamin D content of mushrooms through UV-light or sunlight exposure.

One third of the global population is at risk of at least one type of micronutrition deficiency (also known as hidden hunger), while almost 40 percent cannot afford healthy diets and the nutrient density of staple crops is decreasing because of increasing CO2 emissions. Sixty percent of the calories people eat come from wheat, maize and rice. HarvestPlus aims to improve the nutrient density of these and other key staples, helping transform global and national food systems to deliver nutritious, healthy, and sustainable diets for all. Yet in order to do this, standards, regulations, and laws are essential to distinguish biofortified products from their standard counterparts. Standards are one of the pillars of the enabling environment HarvestPlus has been working to foster to catalyze the scale up of biofortification.

Establishing the relevance of a definition of biofortification

For years, negotiations to define biofortification through the Codex Alimentarius process raised awareness on biofortification and its potential for improving diets. The discussions, which concluded in 2020, also involved debates regarding confusion with regulations for genetic engineering, and with the word “bio” meaning organic in many European markets. Stakeholder and consumer research revealed that the lack of definition was not the issue and the term biofortification would never be used in consumer communications,

Following work with the Food Fortification Advisory Services, HarvestPlus and partners opined that a more accurate and acceptable description or definition of the biofortified products would be “nutrient-enriched,” while the process would continue to be referred to as biofortification.

Standards along the value chain

In collaboration with global food labeling regulatory consultants and experts, HarvestPlus studied the value chain to document the existing standards for seed, grain and food labelling and marketing. This work was carried out for the low- and middle-income countries where HarvestPlus and partners operate country programs as well as developed markets including the United Kingdom, European Union and the United States to understand the possibility of trade and regulatory acceptance in other countries. The most critical gap for unlocking the scale potential of nutrient-enriched products was identified to be at the point of grain trade. Without any standards or specifications, grain traders were unable to assess the nutrient-enrichment status, so they didn’t demand nutrient-enriched grain. This in turn meant sales-oriented farmers didn’t grow nutrient-enriched crops.

In 2019, through a partnership between HarvestPlus and GAIN under the Commercialization of Biofortified Crops (CBC) Program,, several options for generating standards were evaluated: the possibility of reverting to Codex, pursuing country regulations, or establishing standards for each country and crop. Given the program timeline and the pressing need for availing nutritious and low-cost diets because of the global pandemic, a fast solution with a global coverage was required.

The most important stakeholder in standards for grain trade are the end user, that is, the grain buyer. Standards must be internationally applicable, and above all they should be tailored to traders’ needs.  There are currently 12 nutrient-enriched crops available for production in more than 40 countries, each enriched with at least one of the key micronutrients critical to human health: vitamin A, iron and zinc. Setting grain standards by nutrient was thought to be efficient and expedient.

The British Standards Institution (BSI) was selected by the CBC to coordinate and publish Publicly Available Specifications (PAS) for nutrient-enriched grains.  The PAS for each nutrient is co-developed by a multi-country, multi-disciplinary steering group. For example, the steering group that developed PAS for zinc-enriched crops had representatives from the Bangladesh Food Safety Authority, BASF Corporation, Fera Science Ltd, the College of Science and Engineering of Flinders University, 2FAS, the Food Safety and Standards Authority of India, the Food and Markets Department of the University of Greenwich, OLAM International, and the Sustainable Rice Platform. It included nutritionists, agronomists, policymakers, food industry buyers and laboratory analytical specialists from academia, the public sector, government, and the food industry.

In June 2021, the BSI published PAS for zinc-enriched grain; the first-ever international standard for any nutrient-enriched product. It was pursued first because the crops have the potential to increase the zinc intake of billions of people, especially in Asia, and cost-effectively strengthen immune systems amidst COVID-19. PAS for iron-enriched grain was published in December 2021, and the PAS for vitamin A-enriched grains will be published in July 2022.

The impact of the PAS will be realized when buyers demand grain that meets the standards.  To build awareness, HarvestPlus is working to inform and encourage all buyers, including those from the private sector (of all sizes), public sector, such as public grain procurement and distribution programs, and humanitarian agencies, such as the World Food Programme, to use and specifically quote the PAS when demanding nutrient-enriched grain. In the PAS, levels set for grain are the same as those required for breeding and seed standards; having these specifications globally validated and published will pave the way for further policy, regulation and standards in setting for minimum levels for breeding standards. 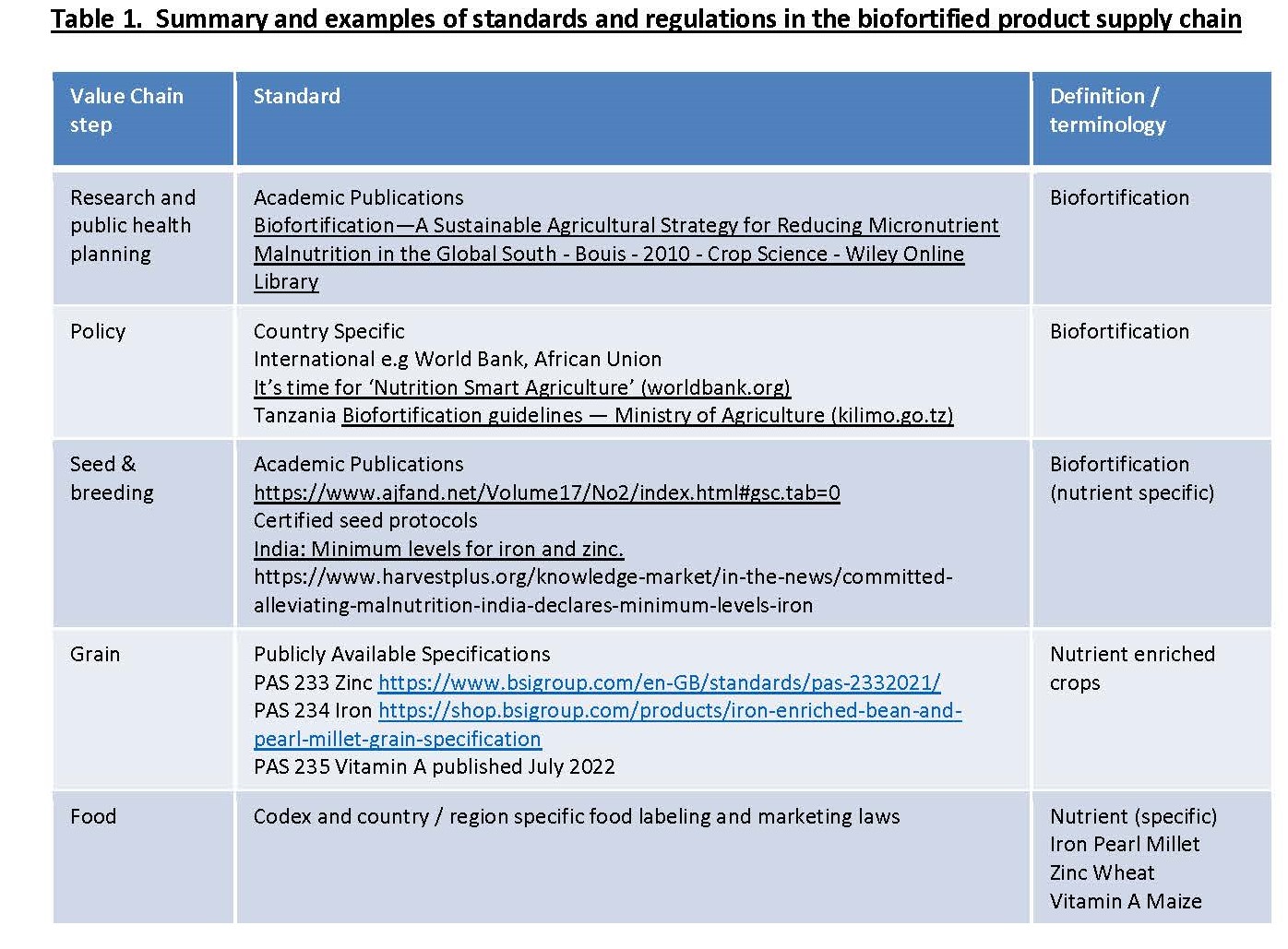 Jenny Walton is the senior advisor for demand creation and business development at HarvestPlus. Her role is to find the incentives for value chain actors in the seed, grain and food industry to be part of the biofortification movement, which involves uncovering the critical barriers to scale to enable the creation of sustainable biofortified food supply chain.

Chelsea Reinberg contributed to the writing of this post.

Efforts to develop a Codex definition for biofortification were funded by A4NH and the Bill and Melinda Gates Foundation.

The initial work on standards mapping which took place 2017 to 2020 was funded by the Foreign Commonwealth and Development Office of the United Kingdom.

The PAS are sponsored by the Commercialization of Biofortified Crops (CBC) Program, which is a partnership between the Global Alliance for Improved Nutrition (GAIN) and HarvestPlus, with funding from Netherlands Ministry of Foreign Affairs and German Federal Ministry for Economic Cooperation and Development.

Biofortification
February 13, 2018
Scaling up Biofortified Crops: Which Ones, Where and When?

Given the ambitious goal of the MacArthur Foundation’s $100 million grant competition — to find and fund a feasible, long-lasting