ACCELERATING PROGRESS TO END HUNGER AND MALNUTRITION THROUGH IMPLEMENTATION SCIENCE 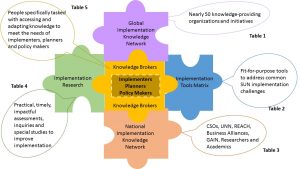 Undernutrition remains a stubborn development challenge in many parts of the world, yet overweight and obesity are simultaneously on the rise globally, and sharply increasing in many low and middle-income countries. As a result, rates of diabetes and other noncommunicable diseases are climbing, increasing the global health burden, while micronutrient deficiencies plague both ends of this spectrum with "hidden hunger."

Many countries recognize the gravity of these problems, and the urgent need to design and implement policies to address them. In addressing this challenge, there is much to learn from one another's experiences, including from researchers working in this field. To maximize such learning, the International Food Policy Research Institute (IFPRI), the Scaling Up Nutrition (SUN) Movement Secretariat, and the Society for Implementation Science in Nutrition (SISN) launched the Knowledge for Implementation and Impact Initiative (KI3) in 2016.

KI3 operates from the premise that malnutrition is a system-wide problem that requires system-wide solutions, and that multisectoral nutrition solutions will require the involvement and commitment of many stakeholders, sectors, and programs. Five strategies have been identified to strengthen the availability, access, and use of nutrition in SUN countries:

The recent IFPRI-FAO conference "Accelerating the End of Hunger and Malnutrition" provided an opportunity for KI3 partners to present the initiative's five strategies to nearly 100 stakeholders, to solicit feedback on the structure and next steps.

"For KI3 to work, we need to ensure frequent, direct engagement with key providers and users of implementation knowledge. The Bangkok conference provided a great platform for this," said Stuart Gillespie, Senior Research Fellow at IFPRI.

The session opened with an overview of KI3's plans and perspectives, but then quickly broke up into group discussions, each targeted at one of the five strategies. Guided by a set of discussion questions, participants were able to delve into the issues and come up with concrete suggestions and action items to move the initiative forward, which they shared with the larger group at the conclusion of the session.

Those discussing the global implementation knowledge network readily agreed on the need for some form of network, yet observed that sources of such knowledge are not widely known, nor is there broad understanding of how they relate to one another. They urged greater collaboration, for information sharing and to avoid duplication of efforts. They highlighted the need for improved nutrition and implementation literacy, with a common language used by providers, researchers, the media, and others. The importance of information sharing, across regions, as well as between and within countries, was emphasized. It often is assumed, they noted, that lessons from one region wouldn't be applicable elsewhere, but this isn't actually the case —certain principles and processes that underpin success are often irrelevant elsewhere.

Discussions among those tasked with considering the matrix of implementation tools echoed many of these points, emphasizing the need for improved flows of information, sharing of knowledge, and lessons learned across sectors, countries, and regions. In order to create tools that will be effective, they noted, all stakeholders, including various ministries, should be involved in planning, and standard processes for reporting should be adhered to from the beginning so that a curation system can be effectively used to make knowledge available to all. As a group, they recognized the common weaknesses  in capacity for coordinating and managing knowledge. Sharing knowledge is crucial for making improvements and scaling up efforts, they noted, while cautioning against developing systems that are too complex; ultimately, systems are of and for people.

Participants tasked with considering the development of a matrix of implementation tools were intrigued by the possibility such a plan offers. They grappled with practical issues such as funding, curation responsibilities, hosting, and dissemination, as well as how such a database could be made functional. They weighed the pros and cons of other databases and knowledge matrices, including Wikipedia, and the usefulness and functionality of search engine capacities. At the heart of the discussion was the goal of creating a system that will enable users to learn from one another, and to operate as a system, rather than as independent developers constantly reinventing the wheel.

More than 20 participants from a wide range of countries engaged in the discussion around implementation research. Such research is often limited, despite the persistence of implementation knowledge gaps. Several barriers were identified, including varying donor priorities, incentives for pursuing other topics and methods in the push to publish, the need for better-developed standards for this kind of qualitative research, and scaling issues.

Yet where barriers exist, so does the opportunity to brainstorm ways to overcome them. Participants highlighted ways to collaborate with others on implementation research, to bring in other sectors and to inform donors and other stakeholders of the benefits of such work. This information sharing included suggestions of who might be receptive partners, across different sectors, ranging from policymakers, to donors, to academic institutions.

Finally, the discussion on knowledge brokers began by identifying those who have operated in this capacity without calling themselves such. Participants identified success factors including being nimble and not bound by too many formal networks, working across sectors and including a wide variety of voices, and fostering growth by providing training and encouraging networking. They shared stories of success to inspire change. Many of these suggestions underscored the importance of these brokers operating in an informal way, and cautioned against too many efforts to institutionalize them.

One downfall to the informal approach that many of these effective brokers take is the lack of ability to operate between sectors. Participants acknowledged that informal relationships tend to flourish among those working together, while connecting across disciplines is more difficult. This causes a particular problem for an issue as cross-sectoral as nutrition, as people in different areas of expertise don't have the opportunity to connect and learn from one another.

To bridge this divide, participants pondered how to create time for these interactions, as well as opportunities to offer knowledge.

"Progress has been made in generating political commitment for nutrition. To address the big "how" questions that remain, we need to continue to strengthen connections between key actors, and we need to facilitate the sharing and use of implementation knowledge. This is what KI3 is about," said Gillespie.

A4NH's work in the Knowledge for Implementation and Impact Initiative (KI3) is conducted through IFPRI. Learn more about KI3.