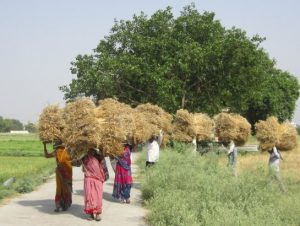 More than 17 percent of people globally lack sufficient zinc in their diets. Deficiencies in this essential micronutrient contribute to an estimated 400,000 child deaths globally each year. Yet new studies from HarvestPlus and CIMMYT show biofortifying wheat with zinc has the potential to improve this critical situation. These studies bring promising news in breeding outcomes and health impacts.

Biofortification, the process of conventionally breeding key staple crops with essential micronutrients to improve nutrition and public health, has emerged as a critical tool in the fight against micronutrient deficiencies that affect approximately two billion people worldwide. (Learn more about A4NH’s research in this area.) While a diverse diet rich in micronutrients drawn from a variety of foods is ideal, it is not always available, particularly among the poorest farming households in Asia and Africa. The diets of many in this situation are largely made up of a single staple crop such as wheat or rice, and finding ways to enrich these crops can help fill the nutrient gap.

Lack of zinc leads to stunting and increased vulnerability to infections and respiratory illnesses, as well as negative impacts on pregnancy. Biofortifying wheat with zinc has been of particular interest to researchers because of the large number of people who rely on this crop, particularly in India, where 40 percent of children under age five are physically stunted.

Two new studies were recently published on zinc wheat biofortification. The first, from researchers at the International Maize and Wheat Improvement Center (CIMMYT), was published in Nature Scientific Reports. The research highlights improved ways to breed zinc-rich varieties by digging into the genetics of wheat. According to CIMMYT:

“Analyzing zinc concentrations in the grain of 330 bread wheat lines across diverse environments in India and Mexico, the researchers uncovered 39 new molecular markers associated with the trait, as well as two wheat genome segments that carry important genes for zinc uptake, translocation, and storage in wheat.”

The second study, from HarvestPlus, was published in Nutrition Journal, and found zinc wheat to improve health outcomes of young children in India. The study revealed that children who ate zinc-biofortified wheat spent fewer days ill. HarvestPlus noted in remarks announcing the study:

The studies present great promise for biofortifying wheat with zinc and generating measurable improvements in health from its consumption, in India and beyond. Dr. Erick Boy, Head of Nutrition at HarvestPlus, noted “access to commercially fortified foods and zinc supplements is limited in many parts of India. A preventive solution like biofortification represents ready availability of and constant access to zinc and other micronutrients through staple crops like wheat for precisely those segments of populations.”

Work for these studies was supported by A4NH. 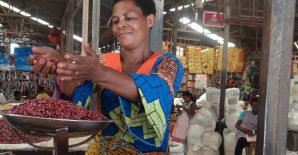 Blog
Gender Equity in the Food Environment: Considerations for Low- and Middle-Income Countries

Blog
Update on the CGIAR Research Response to COVID-19
We use cookies on this site to improve the usability of this website. By clicking 'OK, I agree' button you are giving your consent for us to use cookies ... more info