Read more A4NH research and perspectives on coronavirus and the ongoing global pandemic, including the authors' initial post about this work.

There is a need for data to understand how households are responding to the COVID-19 pandemic to help plan and target appropriate policy responses. This need is especially urgent in urban areas, where residents may face greater public health risks and tighter restrictions. To cast light on how households in Addis Ababa, Ethiopia, are reacting to the COVID-19 pandemic, the Ethiopia Strategy Support Program (ESSP) of the International Food Policy Research Institute (IFPRI), with the support of A4NH, is conducting series of monthly phone surveys. In May, we found that poorer households are taking greater economic hit than those with higher incomes, and that dietary diversity has declined. In our June survey, results suggest the food security situation has not yet deteriorated, but savings that have been used as a primary coping device could run out in the near future.

The phone surveys build on data collected from a representative sample of households that participated in a randomized control trial in 2019, with the endline taking place in early 2020. The first phone survey was conducted in early May covering 600 households, and in early June we were able to re-contact 589 of these households, so household respondents continue to be spread throughout the Addis Ababa income distribution.

While the policies since the pandemic began with Ethiopia’s first case on March 13 have been relatively clear, as in many countries there was confusion, mixed implementation, and a range of economic fallout. Our second phone survey, conducted between May 30 and June 5, aimed to capture the continuing effects on people and their response to COVID-19. The second survey demonstrates that people are responding behaviorally— 97 percent of respondents wear masks when they leave the house. Nonetheless, we find an increase in the proportion of respondents who state they are “very stressed”—the proportion of the sample went from 35 percent in May to 45 percent in June.

In both the May and June surveys, we asked respondents to compare their present household income with their typical income at this time of the year. In the June survey, there appears to be more deterioration of incomes among households in the poorer and middle income categories than there had been in the May survey round (Figure 1). As a result, whereas 58 percent of households had reported either much less or somewhat less income in the May survey, by June this figure had increased to 67 percent. Richer households remain less likely to report substantially reduced income. 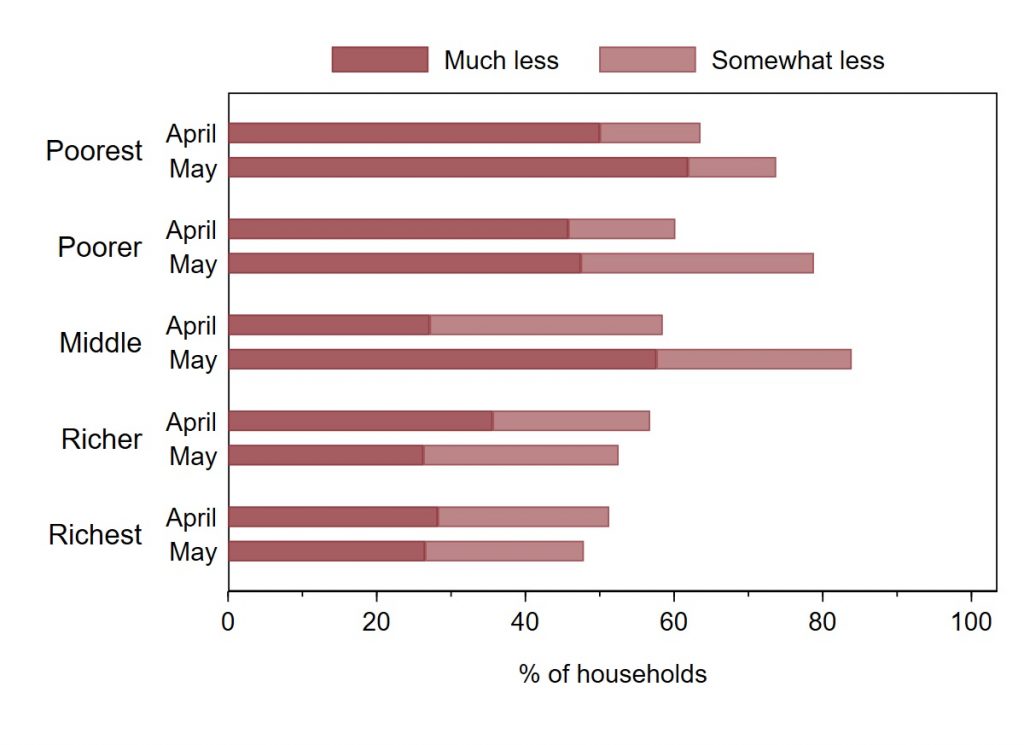 Figure 1: Change in income levels in April and May 2020 compared to usual incomes, by household wealth quintile, Addis Ababa. N=600 households for April, and 589 households for May. Source: Own calculation from Addis Ababa COVID-19 phone surveys.

How are households dealing with reduced incomes? In the June survey, we asked all households about coping strategies, and found that most households report using savings as a coping mechanism (75 percent). The vast majority (72 percent) of households also report reducing non-food consumption and 55 percent report reducing food consumption. Savings, not surprisingly, had deteriorated since the May survey; 22 percent of households now report only having savings to meet food needs for the next week, while this percentage had been 15 percent. About 35 percent of households report they are concerned that household income will not be enough to cover the household’s food needs for the next 30 days.

With declining food expenditures, we observe diet changes already beginning to occur. In both phone surveys, we administered a standard household dietary diversity score module, repeated from the (in person) survey in early 2020. Since the May survey, we see large declines in consumption of meat and poultry (45 to 34 percent), and eggs (54 to 43 percent) while consumption of fruits and dairy remain constant from April but down from February. These results suggest concerns about the declining nutrient density of diets are real: Households are reducing food expenditures by substituting away from more nutrient-dense foods to cheaper, less-nutrient dense foods. As there is substantial uncertainty about how long the pandemic and its economic impacts will persist, these dietary changes could both increase malnutrition and be detrimental to the food system as a whole in the long term. 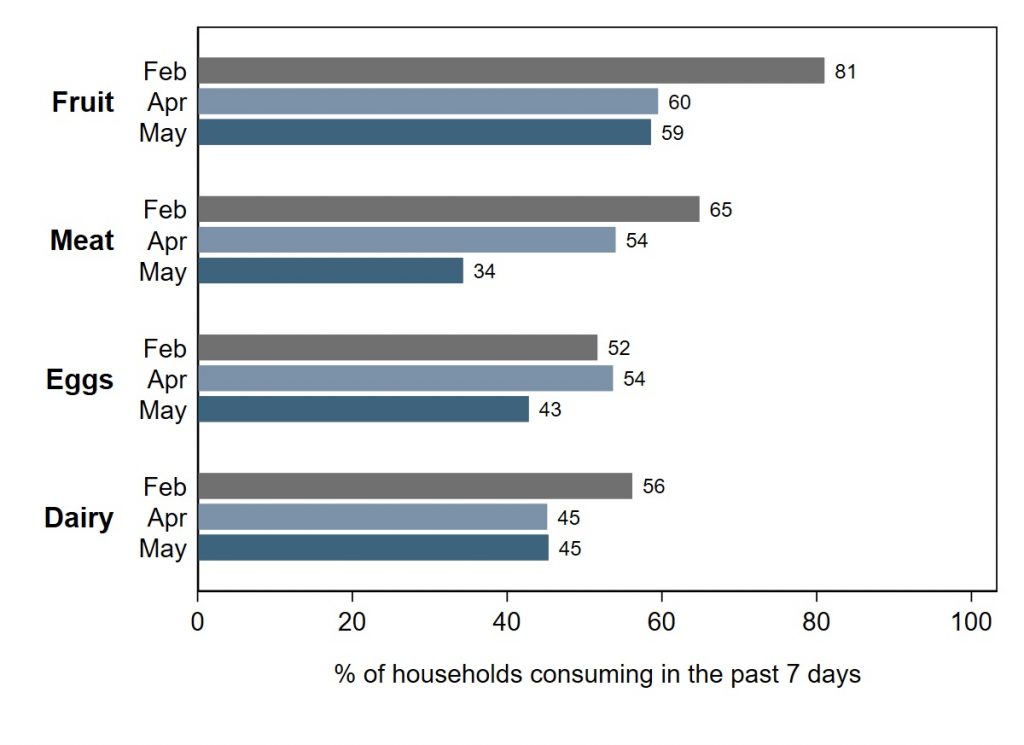 The major disruption of the COVID-19 pandemic may have serious implications for the evolution of Ethiopia’s food system. The reduction in demand for meat and eggs could have implications for their value chains. To respond to the crisis, which is affecting more and more of the income distribution, a policy response could be to rapidly scale up existing social protection programs, such as the Urban Productive Safety Net Program (UPSNP) that is operational in 11 cities. Major international organizations are increasing their funding to UPSNP, thus using the already existing platform through which to channel support to food insecure households in urban Ethiopia. In our sample, more than 30 percent of households report benefitting from the UPSNP. We plan to continue tracking both how policies reach sample households and how food and nutrition security change among these households in coming months.