GENNOVATE is a global comparative research initiative that uses qualitative methods to address how gender norms influence adoption of agricultural and natural resource management innovations. In this blog, Giulia Micheletti, Marlène Elias, and Jessica Raneri of Bioversity International describe a nutrition-sensitive version of GENNOVATE, in which a vignette tool was developed and piloted to understand household decisions related to diets and nutrition.

All households must decide how to allocate food among family members. In many contexts, the distribution of nutritious food is biased against girls and women, exposing them to malnutrition and associated health risks. Nutrition-sensitive interventions typically focus on children and women of childbearing age, who are particularly vulnerable to nutrient deficiencies, but a piece of the puzzle is missing: attention to local social norms, which shape food allocation decisions.

Social norms are the "do’s and don’ts of individual everyday conduct." They are socially constructed rules that reflect what a society or community considers appropriate. Gender norms assign socially approved roles and responsibilities to women and men. These norms shape who makes food- and nutrition-related decisions within a household, what is decided, and how, influencing who can access nutritious food, when, and in what quantities. Gender norms also influence who in the household is responsible for acquiring (growing, collecting, or purchasing) and preparing food. Although understanding gender norms is critical for addressing poor nutritional outcomes in women and children, such norms are rarely considered in nutrition interventions. Vignettes can serve as an entry point to explore and beginning addressing these norms.

‘GENNOVATE: Enabling gender equality in agricultural and environmental innovation’ is a global comparative study that focuses on how gender norms and agency affect rural women’s and men’s ability to innovate. Bioversity International and A4NH partners developed a nutrition-sensitive version of GENNOVATE to explore how gender norms also affect the nutrition of poor and middle-income rural dwellers. This adapted version includes vignettes centered on nutrition. Vignettes present fictional scenarios that are short and relatable to elicit participants’ perceptions around what motivates certain actions or how they think people may react to particular situations. They can be especially useful when dealing with sensitive topics because using stories about third parties can feel less threatening to participants than asking directly about their own actions or experiences.

In the nutrition-sensitive GENNOVATE case studies, vignettes are used to ask participants a series of questions about the division of labor and decision-making on food production, purchase, processing, preparation, and distribution for an imaginary, but typical, family. This fictional family is composed of a mother, a father, grandparents, and children. Participants are asked to identify which (fictional) household members they believe would carry out nutrition-related activities, who would make decisions, on what basis, and why. The questions are formulated in a simple way to learn about, for example:

Participants are grouped by gender, age, and socio-economic status to allow all present to speak freely and to compare views across groups.

Vignettes in practice in Northwest Vietnam 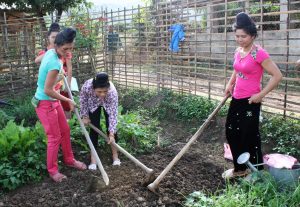 The nutrition-sensitive vignette tool was applied in two villages in Son La province among the Thai ethnic minority group in Northwest Vietnam. Results showed similarities, differences, and reasons behind these in families’ nutritional decisions and practices. This information was used in a research for development project to decide how to engage different family members in tailored nutrition-related interventions that are sensitive to the social context.

Despite a cultural belief among the Thai that men are the “pillar of the family,” men and women spouses discussed food and nutrition issues together and both – along with other household members – were involved in different stages of the nutrition pathway. Men were involved in preserving foods and sometimes encountered new foods while they were away or at the market and decided whether their wives should prepare these foods at home.

“When we have abundant meat, I’ll tell my husband to put it above stove for saving. He expects to make the decision, but if I disagree, he would listen to me.”

“The husband can taste good dishes outside of the home and ask his wife if she can make it.”

Women often made decisions about what to grow in home gardens – the main source of vegetables for many households – considering the taste preferences of their husband and of elders in the household. Men and women alike expressed a desire to be involved in food-related decisions. As a result, village community groups were created to improve the nutritional knowledge and empower both men and women to act on that knowledge and make informed decisions. For example, men in the communities usually prepare food when guests are expected, as a form of respect for the guests; through the community groups, they were encouraged to cook daily, not just for special occasions.

While this tool was first applied within the GENNOVATE study, it can be applied in other projects, tailored to fit different cultural contexts, and combined with other methods. It can be applied with focus groups or individual interviews and can be repeated over time to monitor changes in nutrition-related practices.