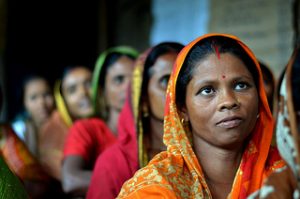 Improvements in the status of women has often been shown to have positive impacts on their children, with increased investments in schooling, nutrition, and health. Yet in order to best target policies and investments, it is important to understand the nuances in a particular context, to better target where improvements may have maximum impact.

To better understand how women's empowerment influences children's schooling and nutrition in Bangladesh, Hazel Malapit, A4NH Gender Research Coordinator, and colleagues analyzed information from the 2012 Bangladesh Integrated Household Survey using the Women's Empowerment in Agriculture Index (WEAI) in a new Development Policy Review paper titled "Intrahousehold Empowerment Gaps in Agriculture and Children's Well-Being in Bangladesh." Using this tool, they looked at the relative empowerment of spouses, in order to understand how that shapes decisions within the household about investments in children.

Using WEAI, researchers can look at responses from male and female decision-makers to the same set of questions, revealing gaps in empowerment through this comparison. The Index looks at five topics: decision-making over production, ownership and decision-making about resources, control of how income is allocated, leadership in the community, and how time is used.

Their analysis revealed interesting findings, including:

While the study suggests that closing the empowerment gap between spouses will serve to benefit children, both nutritionally and educationally, the authors caution that policymakers much watch for unintentional, potentially negative, consequences of such policies on women: increasing workloads, for example, or creating resentment that could result in backlash, could do more harm than good. Policies must be thoughtfully crafted with an eye towards benefitting the entire family: woman, man, and children, in order to truly have an impact. The effort, they note, would be well worth it: cultivating improvements that would blossom over generations.