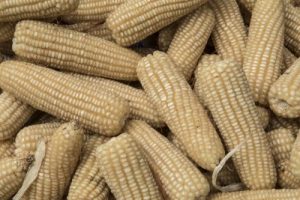 A new zinc-enriched maize variety was released in Colombia on February 23 to help combat malnutrition in South America.

Zinc is an essential mineral that plays an important role in human development but is not naturally produced by humans. Zinc deficiency can lead to impaired growth and development, respiratory infections, diarrheal disease and a general weakening of the immune system. In Colombia, an average of 22 percent of the population is affected by zinc deficiency. However, in certain regions, such as the pacific coast and Amazonia, up to 65 percent of the population is deficient in zinc.

The new variety, known as BIO-MZN01, was developed by the International Maize and Wheat Improvement Center (CIMMYT) with the support of HarvestPlus in collaboration with the International Center for Tropical Agriculture (CIAT), the CGIAR Research Program on Maize (MAIZE) and the CGIAR Research Program on Agriculture for Nutrition and Health (A4NH).

“The support that CIMMYT and CIAT have received from HarvestPlus has been fundamental in allowing our researchers to develop crops with enhanced vitamin and mineral content,” said Martin Kropff, CIMMYT director general. “The improved maize that we present today is an important example of the impact we can have when we work together in partnership.”

The minimum daily requirement for zinc is 15mg, but not everyone has access to foods with naturally occurring quantities of zinc, which makes this zinc-enriched maize variety a boost for nutrition in a region where maize is a staple food.