Adolescence is a crucial stage of life as it shapes an individual’s well-being throughout their life course and affects the well-being of future generations. Using evidence from IFPRIs impact evaluations, Agnes Quisumbing and Crossley Pinkstaff, Senior Research Fellow and Research Analyst in IFPRI’s Poverty, Health and Nutrition Division, present a case for why adolescence is a critical window of opportunity for investing in education and nutrition and provide key-take aways for future adolescent programming. This blog builds on a summarized version that was originally posted on the Young Lives blog.

Adolescence—the second decade of life--is a critical window of opportunity for investing in education and nutrition. These investments affect not only the adolescent’s own well-being throughout the life course but also the well-being of future generations. Yet, in developing countries, much of adolescent programming around human capital occurs in silos:  (1) many programs do not recognize that adolescents may be in various stages of transition to adulthood; (2) programs to invest in adolescent human capital are designed based on assumptions about gender gaps that may no longer be true; (3) many programs aim to improve schooling OR nutrition, but do not always recognize complementarities between the two;  (4) programs often do not build on programmatic or intervention platforms that allow services to adolescents to be delivered at scale; and (5) most importantly, adolescent programming is often viewed in terms of programming that target girls, particularly programs that aim to delay marriage, not realizing that long-run change in gender norms will need to involve boys, future partners, and communities. 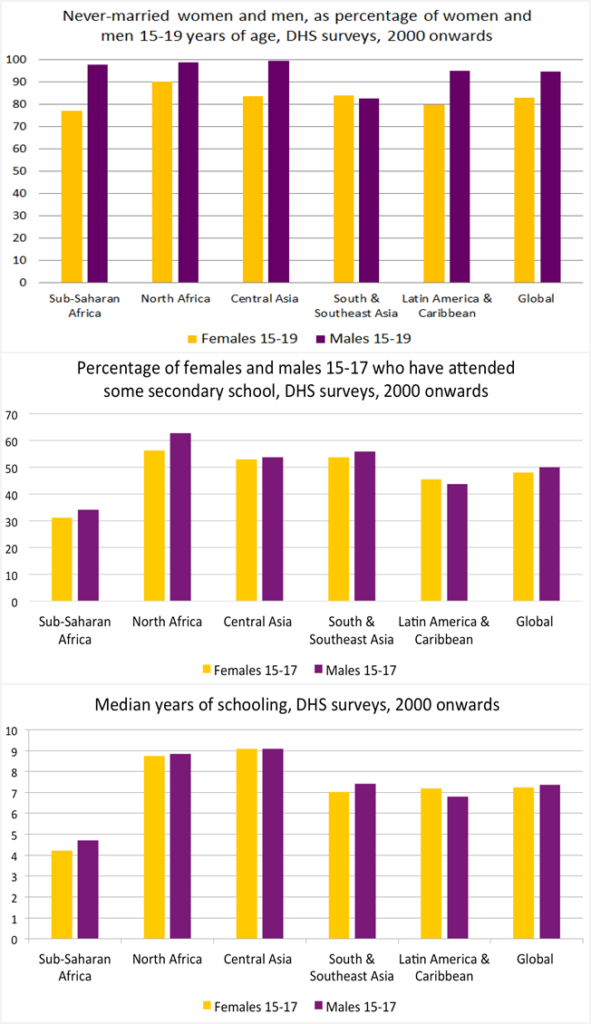 The experience of adolescence is vastly different for boys and girls.  Whereas many doors open to boys as they become men, in many societies, windows of opportunities for girls begin to close as they become women.  Data from the Demographic and Health Surveys in 54 countries shows that a higher proportion of girls age 15-19 are already married, compared to boys of the same age (Figure 1).  On average, close to a fifth (17.2%) of girls 15-19 have ever been married, compared to 5.4 percent of boys; this masks substantial regional variation.  The much higher proportion of adolescent girls who are married or living in union has implications for the opportunities available to them.  Although a higher percentage of girls never attend school, the proportion who have attended some secondary school is not that different between boys and girls on average—with a lot of regional variation (Figure 2).  Indeed, partly as a result of successful programs such as conditional and unconditional transfer programs targeting girls, gender gaps in median years of schooling are closing and have even reversed in some areas (Latin America in particular) (Figure 3).  However, there are large differences between and within regions, making it imperative that adolescent programming is sensitive to culture and context.

Lessons from CCTs in Latin America

Since the late 1990s, the International Food Policy Research Institute (IFPRI) has conducted a number of impact evaluations of Conditional Cash Transfers (CCTs) in Latin America ranging from PROGRESA/Oportunidades (Mexico), PRAF (Honduras), RPS (Nicaragua), Bolsa Familia (Brazil), Juntos (Peru, focusing on indigenous populations), as well as food and cash transfer programs (WFP Ecuador).  All involved close cooperation with governments and implementing agencies in designing the impact evaluation; most (but not all) were Randomized Control Trials (RCTs) with strong qualitative components.  These impact evaluations found that CCTs have increased schooling participation rates, had larger impacts on children in poorer households and during years of transition into school or between school levels, and had larger impacts on girls than boys (see review in de Brauw et al. 2015).

An important, but often unrecognized point is that even in a “typical” CCT, impacts can be quite different across groups.  An evaluation of the Bolsa Familia (BF) program in Brazil, for example, found that impacts vary by sex, age, and location.  On aggregate, BF increased girls’ school participation by 8.2 percentage points and did not have a significant impact on boys.  However, when disaggregated by location, it is evident that the impact on participation was driven by girls aged 6-14 and 15-17 in rural areas, with no impact detected in urban areas.  Any impact on boys 15-17 was in rural areas only. Similarly, impacts on grade progression on aggregate were driven by the larger impacts on girls 15-17 in rural areas; no impact on boys was detected. De Brauw and coauthors conclude that BF is affecting the gender gap in schooling, but is widening a gap that already favors girls.  They suggest that, in this context, it might be important to adopt gender-neutral policies, or to understand better why such programs are more successful at promoting older girls’ education than boys’ education.

Two impact evaluations, one in Peru and the other in Uganda, show that there may be complementarities in schooling and nutrition investments.  A pilot intervention in Cajamarca, Peru, explored an innovative way to reduce iron-deficiency anemia by providing iron supplements through a village clinic in rural Peru, with a randomly assigned classroom-based media program encouraging adolescents to take up the supplement.   Students who watched internet videos on the health benefits of iron were more likely to take up the supplement compared to those watching a video on dental health; the reductions in iron deficiency resulted in significant improvements in school performance, and increased anemic students’ aspirations.

A cluster-randomized study in Uganda examined the impacts of two alternative modalities of implementing food-for-education (FFE) programs in an emergency setting: a schooling feeding program and a take-home rations program, both implemented in Internally Displaced Peoples (IDP) camps in Northern Uganda.  The study found that mild anemia prevalence in adolescent girls exposed to FFE program declined 20 percentage points relative to the control group and that there were no significant differences between the two intervention modalities.  This suggests that resources provided through school feeding programs are not neutralized at home, and that food sharing at home does not prevent improvement in anemia status of adolescent females, making take-home rations a viable alternative to in-school meals.

The results from these two impact evaluations are important in terms of adolescent nutrition programming because ensuring adequate iron status in women before pregnancy is important.  At the same time, both evaluations show that existing delivery platforms (rural health clinics, food for education programs) can be used to meet the twin goals of increasing investments in adolescent schooling and nutrition.  Building on existing platforms could help other programs targeted to adolescents, such as those aiming to delay marriage. Many of these programs are community-based programs that lack a platform for scaling up.  If such programs could be integrated into health or schooling-based programs, it is possible that they could take advantage of complementarities, such as those reaped in programs attempting to improve schooling and nutrition. 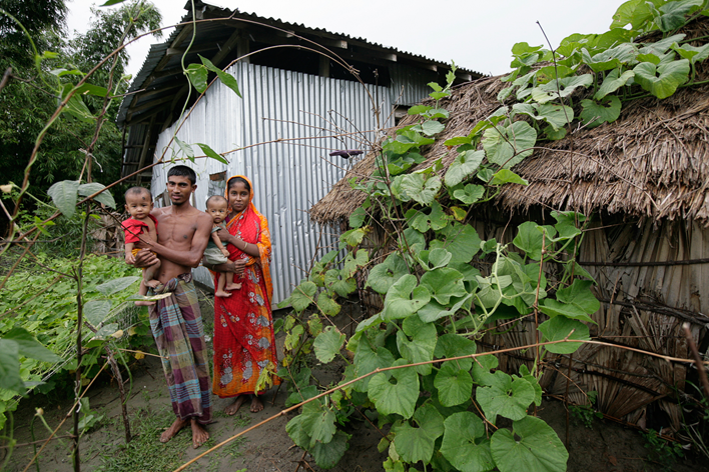 Photo credit: Save the Children

Married adolescents and those who have already begun child bearing, regardless of marital status, tend to be underserved by programs targeting unmarried adolescents.  In some countries, this group could account for a substantial proportion of young adults.  In Bangladesh, for example, while 100 percent of girls age 10-14, whether living with their biological parents or not, are unmarried, between the ages of 15 and 17, 35 percent of girls are married (of which 18 percent have children) , and by age 18-19, 65 percent of girls are married and 43 percent have begun childbearing (Figure 4). 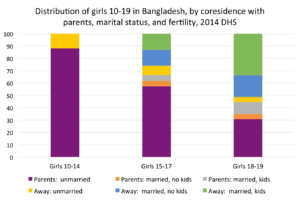 Because many girls drop out of school once they get married in Bangladesh, they would no longer be reached by school-based nutrition programs.  This large segment of the population could be reached through maternal nutrition and infant and young child feeding (IYCF) programs, designed with young mothers in mind.  In Bangladesh, these young mothers typically are among the most junior members of their households, and may not have the

Thus, nutrition programs targeting young mothers could learn from the experience of BRAC’s Alive & Thrive intervention, a program that combined advocacy, interpersonal communication and community mobilization, media campaigns, and strategic use of data for advocacy, program design, implementation, and mid-course adjustments.  The interpersonal component involved visits by community health and nutrition workers who counseled not only young mothers about nutrition and IYCF practices, but also influential household decisionmakers, like husbands and mothers-in-law, to support the young mother in her caregiving role.  Learning from this program, an ongoing research project also being undertaken with BRAC aims to see whether adding a nutrition education and behavior change communication component and an explicit gender-sensitization component to an existing agricultural credit platform targeted to women borrowers can improve maternal and child health nutrition outcomes in Bangladesh.  Recognizing the young ages at which mothers have their first children, mothers ages 18-25 will be targeted for the intervention, and one of the treatment arms will explicitly address issues of gender inequality and intrahousehold relations that limit mothers’ ability to care for herself and her children.

What are the key take-aways for future adolescent programs?

All in all, future programs to invest in adolescents’ human capital should: (1) explore what works in bundled interventions targeting different constraints faced by adolescents, by evaluating the different components of the intervention; (2) develop programming for boys, men, significant family members, and communities to support changes in gender norms; and (3) find out what works best to ensure the delivery of services to adolescents, considering their varied contexts.