This month on the A4NH Gender-Nutrition Idea Exchange, Giordano Palloni, Associate Research Fellow in the Poverty, Health and Nutrition Division at IFPRI, talks about the findings of his research in which a large household panel dataset from Indonesia is used to show that a mother’s preference for the sex of her next born child plays a role in determining the child's nutritional and health outcomes.

Parents in developing countries are repeatedly tasked with deciding how to allocate limited time and market resources across their children. These choices matter: children who receive better nutrition, more parental time, and increased educational inputs are more successful across a wide range of measures later in life. For development researchers and practitioners concerned with improving the long-term well-being of children, it is therefore critical to understand what influences the distribution of resources within the household. While parents undoubtedly consider many child characteristics when making these decisions, one which previous research highlights as being an important predictor of parental inputs is a child’s sex.

In some developing countries – most notably China and India – male children receive significant advantages with respect to parental time, vitamin supplementation, and breastfeeding, which leads to lower perinatal and early childhood mortality (Jayachandran and Kuziemko, 2011; Barcellos et al., 2014). This extreme son-bias, however, is not the norm across the developing world: in most developing countries parents, on average, invest equally in male and female children. Still, the absence of an average difference in the treatment of male and female children may conceal more nuanced, but systematic and meaningful differences in the resources received by children based on their sex.

Indonesia is the largest country in Southeast Asia and the fourth most populous country in the world. Indonesian parents typically desire an equal number of male and female children. That is, if a couple has more male children than female children, parents are likely to desire a female child next. If they have more female children than male children, parents typically desire a male child next. Using a unique panel data set from Indonesia, the Indonesian Family Life Survey (IFLS), I explore whether the mother-reported desire for her next child to be born of a particular sex has implications for early inputs and the health and nutrition of that child. I do so by linking a pre-conception report from mothers about whether they would prefer for their next child to be male or female, to the observed sex and detailed health and nutrition outcomes (Body mass index (BMI), weight-for-age, the incidence of illness, mother reported general health) for the next child they conceive, measured when that child is under the age of eight. I estimate the causal effect of being born of the mother’s preferred sex on health and nutrition outcomes by comparing children whose sex matches their mother’s desired sex with children whose sex does not match their mother’s desired sex.

Columns 1 through 3 of Table 1 present means and standard deviations for height, weight, and BMI Z-scores as well as for indicators for whether each child is wasted, thin, or stunted, for all of the children in sample, those that were born of their mother’s less preferred sex, and those that were born of their mother’s preferred sex. In the sample, 10% of children are wasted, 26% are underweight and almost 39% are stunted.

Column 4 of Table 1 presents the difference in nutritional outcomes between children of a less preferred sex to those of the preferred sex which gives rough estimates of the main empirical findings. The results suggest that maternal preferences over child sex have important health consequences: being born of the mother’s preferred sex leads to improved nutrition outcomes and better overall health in early childhood. Further, the magnitude of the effects is large – for BMI, being born of the mother’s preferred sex has an effect equal in size to the average difference in BMI between the children of mothers with no formal schooling and the children of mothers with a secondary school education (above the median for mothers in the sample). 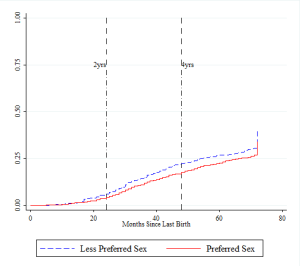 Why, even in a country with no obvious son- or daughter-preference, does being born of a mother’s preferred sex matter so much for early health outcomes? To explore this question further, I look at how the main estimates change with the birth order of the child being considered. It turns out that the estimates are driven entirely by children born second or third among their siblings. This coincides with the ideal total fertility for the vast majority of women in the sample—nearly 4 in 5 women in the sample desire three or fewer children—suggesting that fertility may play an important role in explaining the results. To test this more formally, I use the detailed fertility history available for each mother and investigate whether mothers adjust their fertility in response to having a child of their preferred sex. Figure 1 plots the likelihood that mothers have had another child by the number of months since the birth of the main child. Mothers who did not have a child of the sex they preferred wait fewer months before having another child (lines diverge at about 24 months)— and they are more likely to ever have another child (the gap between the two lines persists through the graph). Mothers who did not have a child of the sex that they preferred also have significantly more subsequent children. Children who are born of the sex that their mothers’ preferred less are therefore more likely to have to split resources with an increased number of siblings, a finding that I show can explain nearly half of the observed differences in early childhood health.[1]

If parents understand how having an additional child can negatively affect the health of existing children, then there may not be much that policy makers can do to prevent the observed health disparities. But do parents really understand the negative consequences that short birth intervals and larger family sizes can have on the health and nutrition of children? Unfortunately, there is little existing evidence about parents’ beliefs on these issues. That said, it seems unlikely that parents are aware of the important implications that even small differences in family size or birth intervals can have for the resources and health of older children. Providing parents with detailed information on the magnitude of these quantity-quality tradeoffs, along with the means to delay or cease fertility, could eliminate the health disadvantages that children who are born of their mothers’ less preferred sex experience.

[1] Economists refer to the observation that an increased number of children can sometimes lead to worse outcomes for each child as the quantity-quality tradeoff (Becker and Lewis, 1973).