Updated June 2021: The research this blog post is based on has now been published in Food Policy. Read the article here. 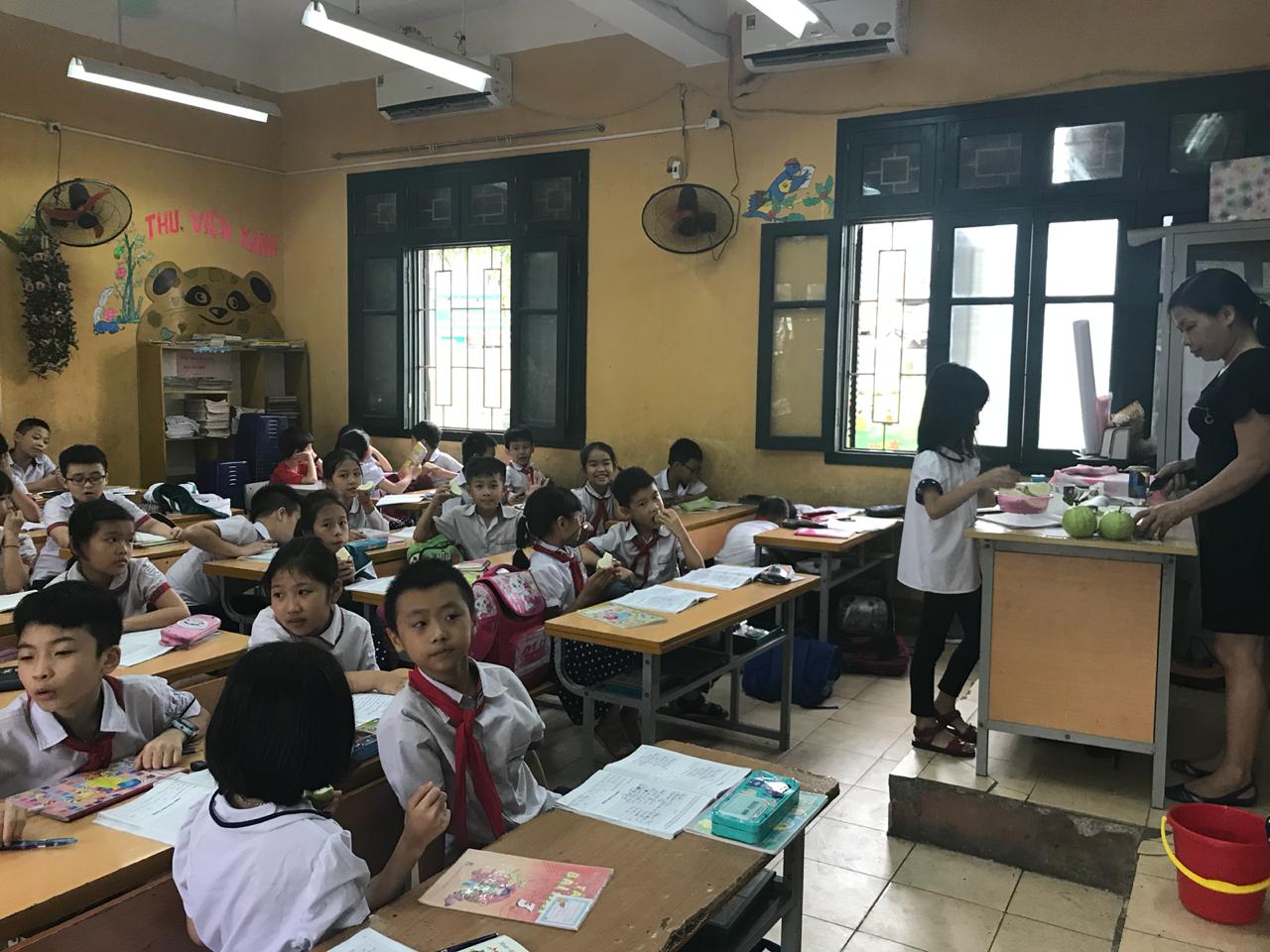 As part of the study, fruit is distributed in a school in Viet Nam. Photo: Ming Nguyen

In Viet Nam, like many low- and middle-income countries (LMICs), a nutrition transition has begun, along with a rising prevalence of non-communicable diseases (NCDs). Unhealthy eating habits, such as consuming sugary drinks and sweet food products, are particularly common among younger people and contribute to NCDs. A 2019 study by the Viet Nam National Institute of Nutrition (NIN) on 5,028 students aged 7 to 17, from 75 schools in Hanoi, Ho Chi Minh City, Thai Nguyen, Nghe An and Soc Trang, found 42 percent of primary school students in urban areas were overweight or obese.

Many LMICs have included school-based interventions in their nutrition policies, for two key reasons. First, the policies can reach children at a time when their eating habits are still forming. Second, lessons learned are carried home: information shared through children can be disseminated to adults. This pathway may be really important in contexts where children have substantially different or more education than their parents.

As part of A4NH’s Food Systems for Healthier Diets research flagship, we collaborated with NIN to design and implement a school-based pilot intervention to promote healthy eating among children, with an aim to also reach their parents. After a qualitative scoping study to identify the potential entry point, we decided on two aims for the research: first, education, by providing nutrition materials for short lessons in school; and second, improving the school food environment, through healthy snacks. We implemented the research in coordination with the local Department of Education and 12 primary schools in Dong Anh, a peri-urban district on the outskirts of Hanoi and an A4NH focal study site.

These two aims were met through a cluster randomized control trial, which was implemented at the grade level. For the education treatment, NIN developed and tested the learning materials, covering five topics on healthful eating and fruit and vegetable consumption. The lessons were designed as show-and-tell talks held each day right before lunch, for five consecutive weeks. Developed by government nutritionist partners, the lessons were standardized to meet national health recommendations, and lessons and accompanying materials (pamphlets and posters) can be adapted to fit different contexts. To facilitate transmitting the knowledge from school to home, the children were given material to take home and share the information and knowledge with their parents. This arm took place in half the grades across the 12 schools.

To study the food environment, we recruited a contractor to supply seasonal fruits as snacks, ensuring the selected company met legal, safety and any school-based requirements to provide food for children at school. It was cross-randomized into two schools. 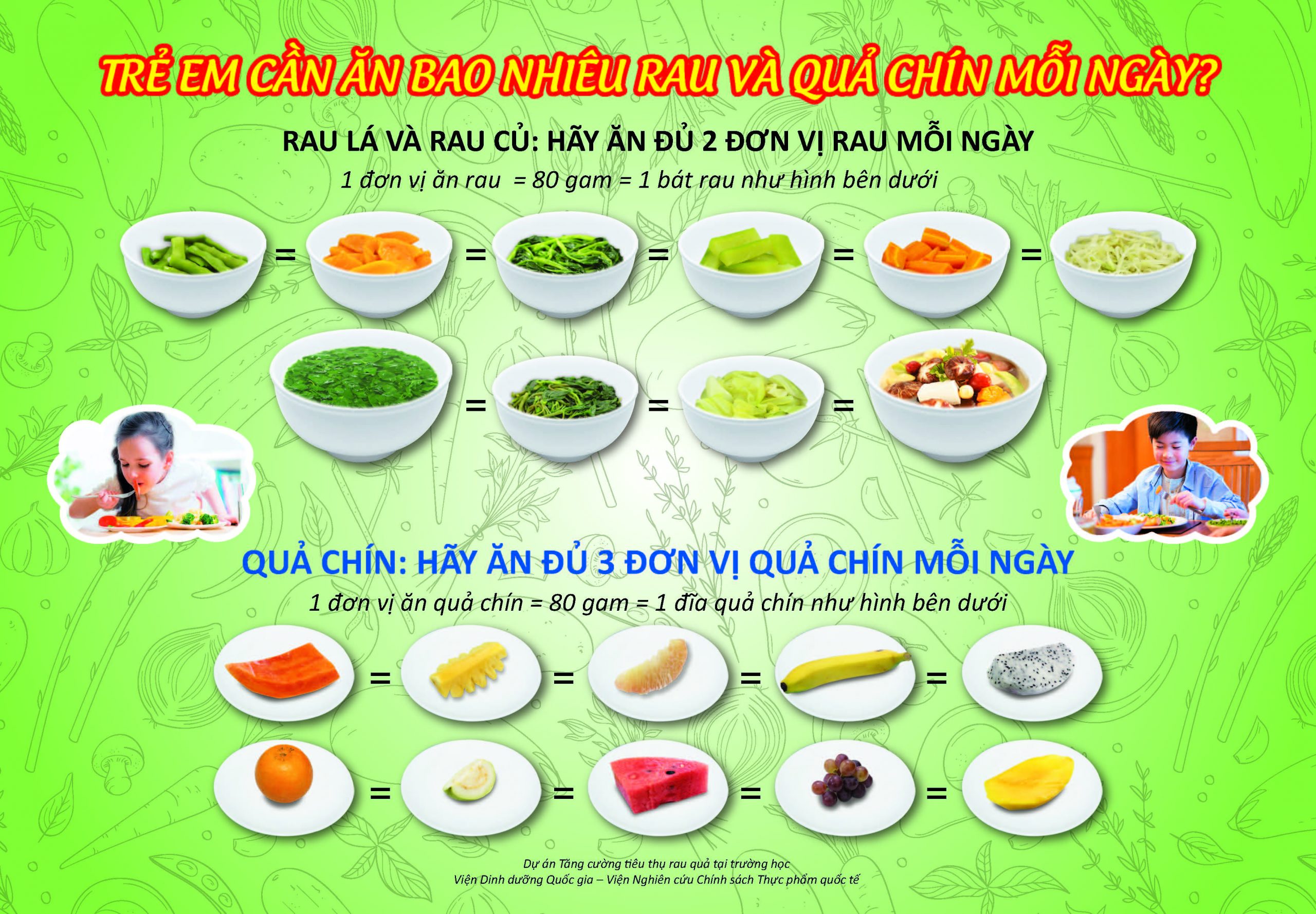 We found that the nutrition lessons increased knowledge among children about fruits and vegetable consumption. However, they did not have a long-term effect on their own.  In the second round of data collection, only children who were also given fruit scored better than the control group in knowledge about fruits and vegetables. And the food environment intervention improved; fruit consumption among children in the treatment group increased by 35 grams (about half a portion) on average, with all of the gain attributable to consumption in school.

Knowing the benefits and having access to the healthier foods is not always enough.  The scoping interviews showed the poor quality of the meals provided to children during lunch. Our follow-up with children six months after the study was a prime example:  the vegetables prepared at school tasted bad, and so even if the children wanted to raise their fruit and vegetable consumption, they didn’t want to eat them. Unless schools are willing to work with food providers to improve meal quality, nutrition education might lose its effectiveness. While initiatives to improve school meal quality exist in Viet Nam, such as the School Meal Project, implemented by Ajinomoto, the Ministry of Education and Training, and NIN, if the local school food suppliers find the current on-line menu planning tool is  infeasible given local contexts, developing tasty, nutritious, and locally-available school meals will remain a challenge.

A challenge to improved fruit consumption among children in Viet Nam is that fruit is not currently widely available in Vietnamese schools. Only some better-off schools in urban areas provide fruit as snacks for primary school children, mostly because they have better access to safe fruit providers and the parents have higher incomes to pay for it. To bring fruit to more schools, both constraints would have to be relaxed, particularly with support from the government and the private sector. Policy makers can ideally build upon lessons learned with the school milk program and lessons from developed countries, such as the EU’s school fruit, vegetables, and milk scheme.

In addition, a common excuse parents give for their children’s low consumption of healthy foods is that children do not like to eat them and making the fruit available will not help. However, we found that given access to healthy and safe food at school, children will gladly consume more of it without offsetting the amount of fruit they eat at home. The short duration of our pilot intervention did not allow us to measure its effectiveness on habit formation, which could potentially be achieved with a larger-scale program.

Finally, family participation in improving children’s diets is critical. The National Nutrition Strategy states that improper nutrition knowledge and practices are still common among mothers and other family members, including those living in less developed areas. The strategy, however, does not specify how to encourage family members to participate. Our intervention addressed this but was unsuccessful in reaching parents. Not only were there no effective communication channels between parents and schools, but the children were not equipped with skills to act as the bridge. As a result, the majority of parents did not receive/recall receiving nutritional knowledge from their children. Educators and policy makers need innovative tools to improve school-home communications, and future research can seek school-based nutrition tools to which parents will positively respond.