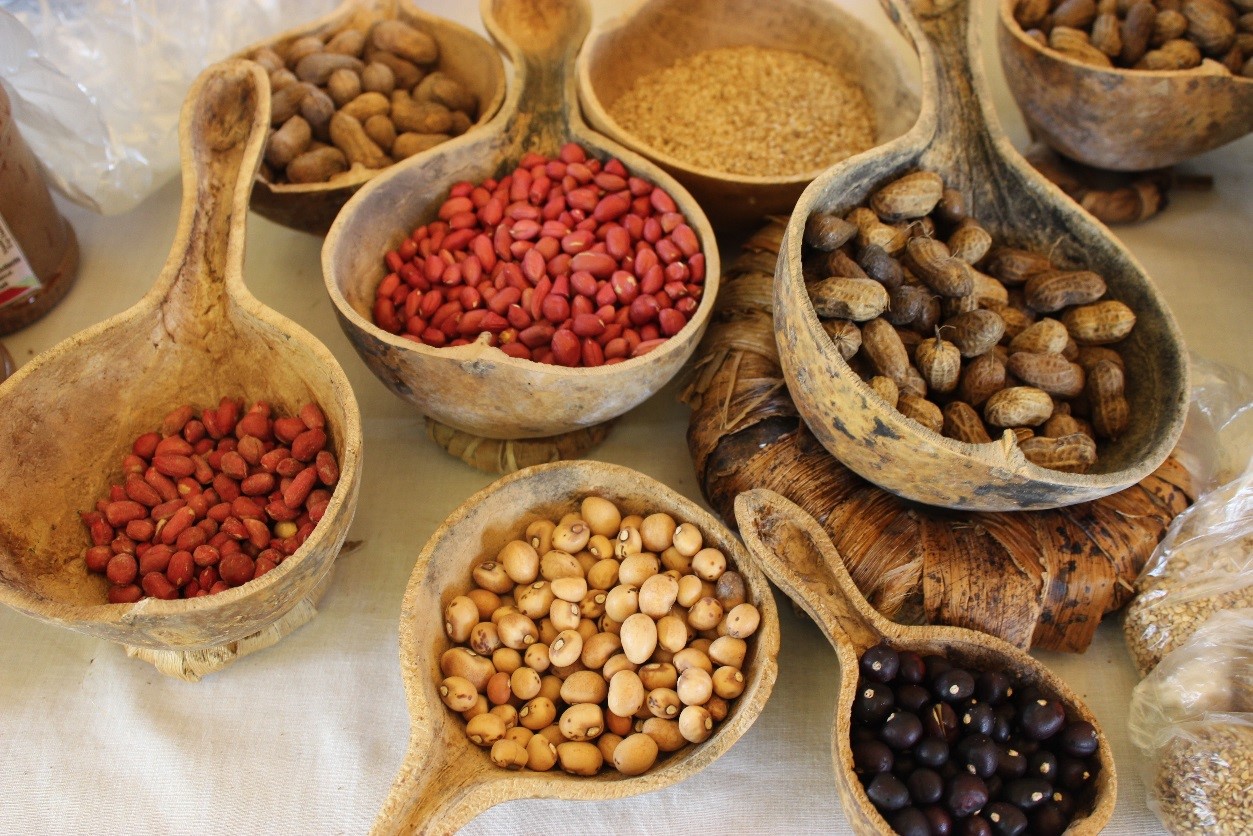 ASK THE RESEARCHERS: THE BIODIVERSITY FOR FOOD AND NUTRITION PROJECT 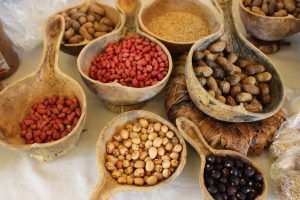 Q: How would you describe the Biodiversity for Food and Nutrition (BFN) Project?

A: Every country has a wide variety of plants and foods people recognize as “what my grandmother would eat,” from wild greens sprouting by the roadside to fruits only grown in home gardens. Although nowadays these are rarely seen on our plates, the exciting truth— that we are sharing— is many of these local food species are rich in micro-nutrients. Compared to many exotic crops, indigenous species are hardier, able to withstand extreme weather conditions, grow in poorer soils, and better tolerate attacking pests and diseases. Inclusion of this native biodiversity in farmers’ fields enables adaptation to inevitable changes in climate and other environmental threats, as well as better livelihoods, especially for smallholder farmers. In fact, our research and experience indicates these species have strong potential to contribute to more nourishing and sustainable food systems worldwide.

Q: What were the original goals?

A: For many people, it is a huge surprise that traditional food species can be both highly nutritious and better-adapted to local ecosystems. Because the evidence for this is often missing or fragmented, the BFN Project and its partners aimed to generate reliable data on the nutritional value of these species that could be shared in-country and at the global level. This evidence would then be used to influence policies and markets, building recognition and capacity for native biodiversity.

The Project stemmed from the Convention on Biological Diversity’s Cross-cutting Initiative on Biodiversity for Food and Nutrition (COP8, 2006), and inspired FAO’s Voluntary Guidelines for Mainstreaming Biodiversity into Policies, Programmes and National and Regional Plans of Action on Nutrition (2015).

Q: Did the project succeed?

A: Our country partners put in a tremendous amount of work over the last six years and it shows. Outcomes include food composition data on 195 species added to national databases and the global FAO/INFOODS database, supportive policies such as an official list of Sociobiodiverse Species in Brazil (Ordinance n. 284, 2018), pioneering work linking farmers and schools in Kenya, a “wildly” popular herb festival occurring annually in Turkey, women-led local food businesses in Sri Lanka… we could go on and on.

Importantly, these results have translated into wider recognition of the role of agricultural biodiversity for food and nutrition at a global level. For example, we just saw our work highlighted in the FAO State of the World Report on Biodiversity for Food and Agriculture.

Q: What did you learn that surprised you?

A: We knew many indigenous species are underutilized, despite having high nutrition potential. However, the research results have been quite eye-opening. Now we have quantifiable data that demonstrates just how significant an impact our prioritized species and varieties could have. For example, policymakers and educators can see charts showing that African nightshade contains 16 times more iron than the more commonly consumed kale!

Q: Why are these outcomes important?

A: To continue with the African nightshade example, this data has important ramifications for a region where 26 percent of children suffer from chronic malnutrition. Especially when you realize integrating African Leafy Vegetables into school meals translates into potential health benefits for 1.5 million students in Kenya.

Having a solid body of evidence means it is now possible to approach decisionmakers and give a clear justification for taking food biodiversity more seriously. With a proper enabling environment, it becomes much easier to mainstream biodiversity into programs and policies tackling nutrition and food security.

Q: What was the purpose of arranging the work around countries?

A: Although the four countries share an abundance of underutilized biodiversity, their socio-economic, geographic, and political contexts vary significantly. Providing very broad guidelines for the three components – Evidence, Policy, Awareness – allowed each country to adapt the BFN approach to its particular context and take advantage of opportunities as they arose. Collectively, the four countries developed a range of practical solutions to the sectoral barriers that normally hinder the effective mainstreaming of biodiversity and are now able to act as knowledge hubs for the regions. This is the best way of ensuring our work with local and traditional food species is relevant and respects culture and geographic location. 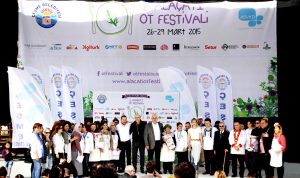 Q: How did relationships with partners in the country evolve?

A: Let’s look at Brazil for a moment: at the project’s outset in 2012, Brazil already had the Zero Hunger Strategy and National Dietary Guidelines prioritizing diverse diets and smallholder farmers. BFN Brazil worked within this framework to select promising indigenous species, guided by the Ministry of Environment’s Plants for the Future Initiative. Samples of these species were collected in different regions by students, ethnobotanists, etc. but some teams did not have the labs to conduct food composition analyses. The universities and research centers came together to create regional networks for sharing facilities to conduct nutrition analyses. The results were published online through a government-sponsored database and used to further integrate local biodiversity into programs like the National School Feeding (PNAE) and National Food Procurement (PAA) programs. Meanwhile, the research networks continued to collect traditional knowledge, and reached out to chefs to develop recipe books, cooking workshops, and link with TV and other media to bring this information to the public. It’s a very dynamic, evolving process!

Brazil was fortunate to have an enabling environment, and their work inspired other countries such as Kenya to adapt these strategies following cross-country knowledge sharing at project meetings and conferences. In the other countries, research was vital: evidence generated by the project helped gain newfound trust and recognition for underutilized biodiversity and the BFN platform.

Q: What types of partnerships were key? Did they change over time?

A: The work BFN accomplished is only possible because of strong relationships in which partners were able to have ownership and act in the best interests of their communities. Of course, the unpredictable turnover of officials in government agencies and other partner institutions is a challenge, but this was mitigated by maintaining links with many diverse actors. A good example is in Kenya where we had “policy champions” from many ministries on our side.

Q: How did those relationships work? What was essential?

A: BFN Kenya’s National Project Coordinator, Dr. Victor Wasike, would stress how critical it is to cultivate close personal relationships across many sectors: the early support of interested ministers from the departments of health and agriculture, as well as public stakeholder engagement, enabled our Kenyan partners to establish Kenya’s first Biodiversity Conservation Policy last year in Busia County. Members of the policy taskforce were invested in its success because they could envision the tangible benefits local biodiversity would bring to the community, such as increased iron intake to combat anemia, or new market opportunities for entrepreneurial farmers. That last element is a great example of how much can be achieved when different groups work together: BFN partnered with a local community organization to train farmer groups on the sustainable production and marketing of African leafy vegetables, while fostering relations with nearby schools and health clinics and raising awareness of the nutritional benefits of the greens. The result is that eight farmer groups have signed contracts with 13 schools for the provision of indigenous greens at a fair set price, and the healthy greens are now included in institutional procurement programs.

It is also important to note this work requires ongoing resources and financial support. Returning to the federal level, Brazil engaged the Ministry of Finance and Planning to gain increased budget allocations for the project and biodiversity conservation. Following the 2015 revision of the National Biodiversity Strategy and Action Plan (NBSAP) by our partners with BFN-provided evidence, more than US$60 million was pledged to protect the loss of national biodiversity for food and nutrition.

Q: What is the role of the private sector?

A: It’s important to have an economic justification for biodiversity mainstreaming, and the private sector represents an entry point for a much wider market. This means financial incentives to cultivate local species, as well as improved livelihoods for smallholder farmers.

For example, private partners such as wholesaler Erüst Tarım have brought wild edible species into grocery stores in Turkey. There is buzz around creating local food sections, like designated organic sections.

Sri Lanka’s Food Promotion Board has explored novel food product development as another way of entering the market, producing health drinks made with local fruits like soursop. BFN was also involved in training for “Hela Bojun – True Sri Lankan Taste”, a series of 17 (TripAdvisor-rated!) local food businesses in which the women owners currently earn $600-800 per month cooking and selling traditional dishes. All of these activities build capacity so biodiversity and its producers are better equipped to enter a wider market and reach more consumers.

Q: Even though the work was done within specific countries, are there broader lessons?

A: Absolutely; our intention has always been to share country results with a global audience so these themes can be explored in other regions. In fact, this is why we are currently preparing a book (for Earthscan’s series on Issues in Agricultural Biodiversity) that showcases in-country methods, paired with broader thematic content from a range of specialists sharing knowledge and case studies on topics from School Feeding to Sustainable Gastronomy. The idea is to highlight challenges, successes, and the “how?” of mainstreaming biodiversity.

Q: How will the project results lend themselves to learning elsewhere?

A: Collecting a portfolio of positive experiences and evidence is a huge achievement, but it is just as important to share these results with others. We brought the combined experiences together on the BFN website with free online resources, such as the BFN E-Learning Course and our Mainstreaming Biodiversity Toolkit, that help others interested in promoting local biodiversity for improved nutrition.

Q: How will this work move forward? What’s next?

A: Great question! We were just asked this at our BFN Side Event during the 17th Commission on Genetic Resources for Food and Agriculture (CGRFA) meeting. Our supporters at UN Environment and FAO, and our country-level partners, have a lot of positive momentum we want to carry forward.

We are already conducting surveys in other regions of Kenya, as well as neighboring countries, to assess the possibility of scaling up the BFN Kenya’s Direct Procurement model for home-grown school feeding.

At the more global level, we are looking at how the work will evolve to address the post-2020 Biodiversity framework and CBD COP15 in Beijing. We’ve discussed bringing together more countries by creating an Action Network on biodiversity and nutrition, aligning with the UN Decades on Biodiversity and Nutrition.

A positive sign is how the project’s themes are much more widely recognized today than at the outset in 2012. Increasingly, publications such as the recent EAT-Lancet Report are generating discussion and drawing people’s attention to the need for dietary transformation for improving nutrition and the environment. A locally-aware, diverse diet is essential for our future, and we need to prioritize strategic and effective mainstreaming of the nutrient-rich resources promoted by BFN. We are very hopeful this is just the first phase, and that there is a lot more to come.