TACKLING THE DOUBLE BURDEN OF MALNUTRITION: TIME TO INNOVATE! 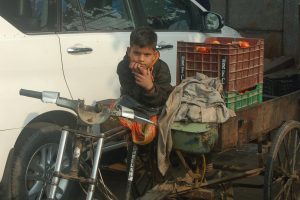 The first decade of the 21st century was one of widespread inertia toward the burgeoning “double burden,” that is, rising overweight co-existing with relatively stagnant undernutrition rates — even within the nutrition and public health world.

IFPRI first started to work in this field in the late 1990s, culminating in the 2003 book The Double Burden of Malnutrition in Asia: Causes, Consequences and Solutions. But not much happened for the next decade or so. Since then, the imperative for action on all forms of malnutrition has been reflected in the 2030 Agenda for Sustainable Development (especially SDG2), the World Health Organization (WHO)’s Global Nutrition Targets (2025), the UN Decade for Action on Nutrition (2016-25), and WHO’s Global Action Plan for the Prevention and Control of Non-communicable Diseases (NCDs) (2013—2020).

Against this backdrop, a greater priority is now being attached to “double duty actions” that target common or shared drivers of both undernutrition and overweight (WHO 2017). To date, the emphasis has been on single, nutrition-specific “double duty” interventions, such as exclusive breastfeeding promotion.

Crucially important, but more is needed. 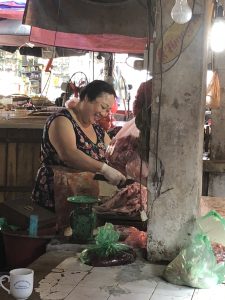 A woman prepares meat for sale in a wet market in Hanoi, Vietnam. Photo: JHodur/A4NH

Historically, nutritionists have viewed nutrition as an outcome, affected by several drivers that originate in different sectoral domains. Similarly, we now need to keep the “double duty” focus on outcomes, and the multiple drivers that lead to these outcomes. This means we need to continue to act multisectorally.

Synergies may be exploited by integrating interventions, e.g. those focused on healthy lifestyles (including diet and physical activity). We simply don’t know enough about multisectoral approaches to addressing the double burden. And we don’t know whether lessons learnt through “stories of change” in addressing undernutrition have relevance for the obesity challenge. More work is needed – which is why A4NH's Flagship Research Program SPEAR is embarking on a new wave of case studies, this time called “Stories of Challenge,” to investigate how political commitment and policy traction is being generated to deal with overweight and obesity.

The double burden agenda also calls for innovation – especially in the context of the limited response, and dismally low levels of financing currently channeled, to obesity and NCD prevention and control. As the 2018 Global Nutrition Report shows, only $31m in aid is being spent each year to address obesity and NCDs -- a mere 0.18 percent of official development assistance – and most of this comes from just three donors.

In December, the International Atomic Energy Agency (IAEA) hosted the International Symposium on Understanding the Double Burden of Malnutrition for Effective Interventions. My presentation focused on double duty innovations, highlighting an experimental approach (Pivotal Movement) for using social incentives and fitness tracking technology to incentivize activity that is then used to leverage matched financing for nutrition and health projects. Pivotal revolves around the strength and the links between three communities that all converge on a curated web platform: i) calorie burners (who cycle, run, walk, swim, with their data automatically uploaded at the end of the day), ii) investors or donors who match-fund this calorie burn according to pre-specified terms, and iii) implementing organizations who use the funds generated to support nutrition and health projects, locally or globally. If this works – it’s currently in trial – it could be a significant “win-win”, as the process of raising much-needed funding (via more people becoming more active) is in itself a major boost to health. More on this approach can be found at www.pivotal-movement.org.