Compared to an influential diet for promoting human and planetary health, the diets of average Indians are considered unhealthy: comprising excess consumption of cereals but not enough consumption of proteins, fruits, and vegetables, according to a new study by researchers from the International Food Policy Research Institute (IFPRI) and CGIAR Research Program on Agriculture for Nutrition and Health (A4NH). The findings broadly apply across all states and income levels, underlining the challenges many Indians face in obtaining healthy diets.

“The EAT-Lancet diet is not a silver bullet for the myriad nutrition and environmental challenges food systems currently present, but it does provide a useful guide for evaluating how healthy and sustainable Indian diets are,” said the lead author of the research article, A4NH Program Manager Manika Sharma. “At least on the nutrition front we find Indian diets to be well below optimal.”

The EAT-Lancet reference diet, published by the EAT-Lancet Commission on Food, Planet, and Health, implies that transforming eating habits, improving food production and reducing food wastage is critical to feed a future population of 10 billion a healthy diet within planetary boundaries.

While the EAT-Lancet reference diet recommends eating large shares of plant-based foods and little to no processed meat and starchy vegetables, the research demonstrates that incomes and preferences in India are driving drastically different patterns of consumption.

The study, “A comparison of the Indian diet with the EAT-Lancet reference diet”, co-authored by A4NH’s Manika Sharma and Devesh Roy with IFPRI’s Avinash Kishore and Kuhu Joshi, was recently published in BMC Public Health. Using consumption data from the 68th Round of National Sample Survey (2011-12), they compared diets across Indian states and income levels to the EAT Lancet reference diet. The study compares differences in calorie consumption across income groups, urban and rural sectors, and geographical regions.

The findings show a disparity in overall calorie intake between income groups: the richest 10% of households consume more than 3,000 kcals/person/day while the poorest 10 percent consume only 1,645 kcals/person/day. On average, the Indian total calorie intake is approximately 2,200 kcals/person/day, 12 percent lower than the EAT-Lancet reference diet’s recommended level. “But we find it intriguing that despite lower calorie consumption levels, obesity is still rising in India,” co-author and IFPRI Research Analyst Kuhu Joshi said. The researchers offer sedentary lifestyles as a potential cause of the phenomenon, showcasing the complexity of the links between diet, lifestyle, and health.

Compared to EAT-Lancet’s recommendation for a well-balanced diet, most Indian households’ diets concentrate heavily in some food groups and lack others. While the EAT-Lancet diet recommends that about one-third of daily calorie intake should come from whole grains, they make up 47 percent of the average Indian diet. In the poorest rural households, that number is as high as 70 percent. Meanwhile, the average Indian’s caloric intake of fruits is less than 40 percent of what the reference diet recommends. Underconsumption of vegetables is also common across all but the richest households. 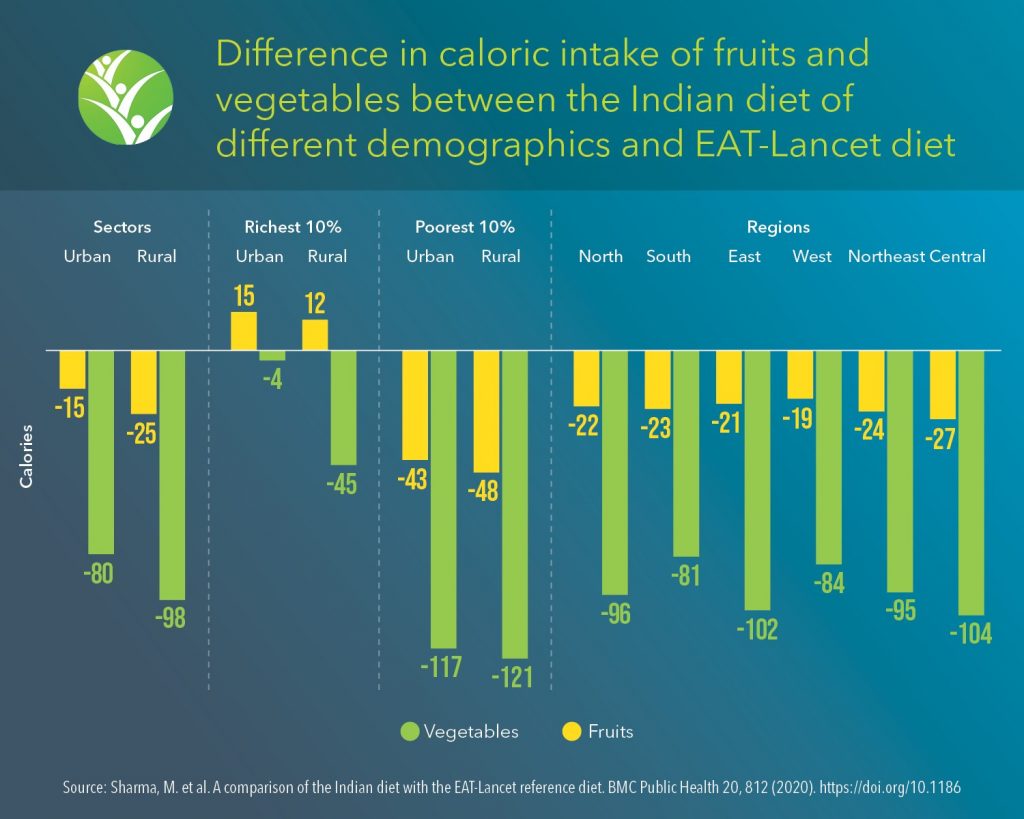 Fig 1: According to calorie intake calculations, most Indian households consume far fewer vegetables and fruits than what the EAT-Lancet reference diet recommends.

Fruits, vegetables, and animal source foods are generally more expensive and inflate more quickly than processed foods and grains, the researchers report. Therefore, the EAT-Lancet reference diet, which consist largely of fresh produce, poses a steep cost for the average household in India.

“Low affordability is only a part of a bigger picture, however,” said IFPRI Research Fellow Avinash Kishore. “We were surprised to see that even the richest households do not consume enough protein-rich foods, fruits, and vegetables.” In comparison, the researchers found that urban households in the highest income group consume almost one third of their total daily calories from processed foods such as bread, bakery products, refined wheat flour, sweets, and chips. Processed foods account for 10 percent of daily caloric intake in both urban and rural areas. The researchers point to other relevant factors such as a lack of availability, accessibility, awareness, and acceptability as possible explanations for their findings.

In order to create a shift towards healthier and more sustainable diets, availability, accessibility, awareness and acceptability need to play a larger role in agriculture, trade, and consumer awareness policies. The study recommends increasing production of healthy crops (e.g. coarse cereals, fruits, vegetables) and limiting production of those that leave large environmental footprints (e.g. sugarcane, rice). Public health and nutrition policies should also address malnutrition, which is especially aggravated during the COVID-19 pandemic due to shocks on food sources and income. A holistic policy approach can potentially transform the Indian food system, closing the dietary gap so that it provides healthy, sustainable, affordable diets for all.

The International Food Policy Research Institute (IFPRI) provides research-based policy solutions to sustainably reduce poverty and end hunger and malnutrition in developing countries. IFPRI was established in 1975 to identify and analyze alternative national and international strategies and policies for meeting the food needs of the developing world, with particular emphasis on low-income countries and on the poorer groups in those countries. It is a research center of CGIAR, a worldwide partnership engaged in agricultural research for development. Visit www.ifpri.org Follow: @IFPRI

With an innovative perspective that focuses on consumption and demand, the CGIAR Research Program on Agriculture for Nutrition and Health (A4NH) seeks to realize the enormous potential of agricultural development to make significant contributions to improving the nutrition and health of people worldwide. The program is led by IFPRI. Learn more at www.a4nh.cgiar.org or follow us at @A4NH_CGIAR.