Dengue fever, a viral infection transmitted to humans through the bites of infected Aedes mosquitoes, is the leading cause of hospitalization and death for children in Southeast Asia. With a population of 93 million in 2015, and a high population density of about 263 people per square kilometer, Vietnam ranks among the countries the highest incidence of dengue fever.

To enhance prediction and control of the disease in Vietnam, A4NH researchers at the International Livestock Research Institute (ILRI) and partners have developed a statistical model for forecasting dengue fever incidence. The study has recently been published on PLOS One.

The existing global dengue risk maps cover multiple countries, including Vietnam, but they show a generalized distribution of risk within countries. Country-specific risk maps and forecasting models on dengue have previously been developed for many countries, including Sri Lanka, Brazil, Argentina, Singapore, Colombia, and Venezuela. This new work from A4NH generated comprehensive dengue fever risk maps for Vietnam.

In this study, researchers used dengue surveillance data from all 63 of Vietnam's provinces, compiled by the Ministry of Health between 2001 and 2012; monthly meteorological data from the Institute of Meteorology and Hydrology and Climate Change; and land cover data from the United States National Aeronautics and Space Administration's (NASA) Moderate Resolution Imaging Spectroradiometer (MODIS) website to develop the forecasting statistical model.

The study found that dengue incidence had a strong seasonal pattern which often peaked between July and October. This peak closely followed that of maximum rainfall, and minimum and maximum temperatures. Provinces in the south of the country had higher reported incidences compared to those from the central and northern regions. The capital city of Hanoi also reported higher numbers of cases compared to the neighboring areas.

The findings provide important forecasting tools for dengue fever at the country level. In the future, researchers hope this knowledge will be used to design national dengue control and prevention programs. 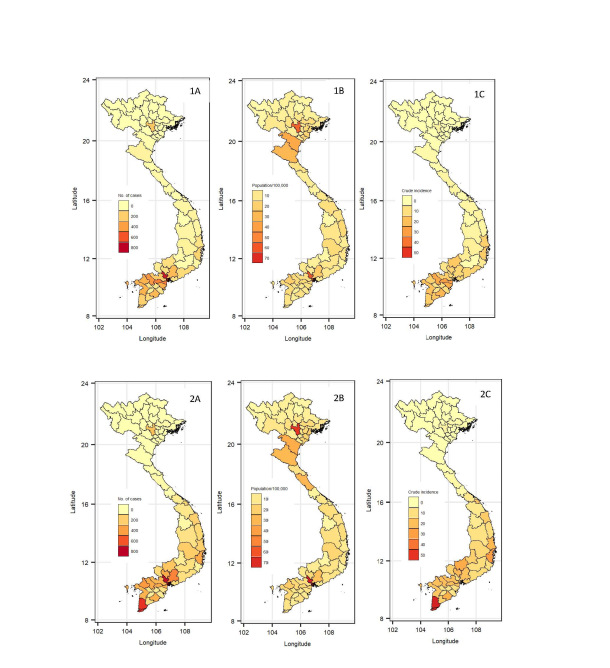 A version of this blog first appeared on ILRI's Asia website.

The General Department of Preventive Medicine, Ministry of Health of Vietnam (GDPM/MOH) and Institute of Meteorology and Hydrology and Climate Change, Ministry of Natural Resources and Environment provided information on dengue cases and meteorological data. This work received support from A4NH, led by the International Food Policy Research Institute (IFPRI). We thank all donors who supported this study through their contributions to the CGIAR Trust Fund.