With August 2017 marking the end of Transform Nutrition’s first phase, the consortium recently convened research symposia in Kenya and Nepal, to discuss results from and next steps for East Africa and South Asia, respectively.

The meetings, which drew a total of more than two hundred people, included participants from NGOs, academia, the government, donor agencies, and the media who came to discuss tackling undernutrition in each region.

Led by the International Food Policy Research Institute (IFPRI), Transform Nutrition uses research-based evidence to inspire effective action to address undernutrition. The project’s first phase, begun in 2012, was funded by UK aid from the UK government. The consortium of five international research and development partners seeks to strengthen the evidence base for nutrition, focusing on the 1,000 day period from pre-pregnancy to 24 months of age, the window where interventions aimed at reducing undernutrition are most effective. The project operated in South Asia and East Africa as these regions have the highest rates of undernutrition globally.

The first of the two recent conferences was held in Nairobi, Kenya, on June 8, 2017, and concentrated on achievements in and challenges remaining for Kenya and Ethiopia. A month later, on July 8, participants gathered in Kathmandu, Nepal, to discuss issues and progress in India, Bangladesh, and Nepal. Each event featured presentations from researchers and local stakeholders about lessons learned during the six years of the Transform Nutrition project. Discussion and participation from the audience, which enabled attendees to network and learn from one another’s experiences.

The need to transform and strengthen leadership emerged in both conferences as a key priority moving forward. At the South Asia meeting, participants homed in on the particular need to do so at the local level, by supporting staff and frontline workers in communities, while East Africa conference participants discussed how important it is for leaders to bring actors together across sectors to ensure nutrition receives proper attention. Barriers of limited infrastructure was an issue also considered at the Kenya meeting, echoed in Nepal as challenges to delivery and implementation were raised.

With Transform Nutrition officially winding down in these regions, it was an important time for key actors in both regions to come together, not only to hear results, but to connect with one another and identify how to move forward and continue progress the program has started. All of the research undertaken by Transform Nutrition is available on the website, while summaries for key themes can be found in these issue guides:

The role of social protection and agriculture in tackling chronic undernutrition

The Transform Nutrition initiative will now move into a second phase, funded by the Bill and Melinda Gates Foundation, focusing on West Africa. 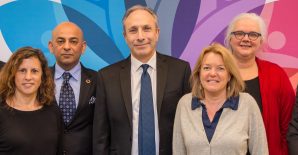