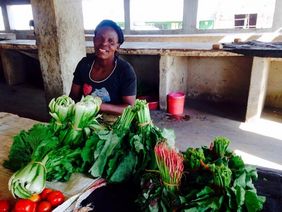 Nutrition Specialist Molly Ahern talks about the methodologies used to learn about local diets in northern Malawi and northern Zambia and help increase their nutritional value and diversity.

Poor nutrition during the first 1,000 days of a child’s life – from conception, through pregnancy and lactation, to the child’s second birthday – can result in permanent developmental problems. The recent Demographic and Health Surveys conducted in Malawi and Zambia show that, respectively, 37% and 40% of children under five suffer from stunting, 3% and 6% from wasting (acute malnourishment), and 12% and 15% are underweight (DHS N. S., Malawi Demographic and Health Survey, 2016) (DHS, 2015).

The nutrition status of women, moreover, exemplifies the double burden of malnutrition with 7% and 10% being underweight and 21% and 23% overweight or obese in Malawi and Zambia, respectively (DHS, 2015) (DHS N. S., 2016). Although the data available mentions primarily women of child-bearing age and children under five, much of the population suffers from a low intake of micronutrients because of their staple diets (mostly maize). The most common nutrient deficiencies are due to lack of iron, vitamin A and zinc, which could result in anemia, night blindness and zinc deficiency.

Bioversity International and partners are working in selected communities in northern Malawi and northern Zambia to improve the quality and diversity of their diets, and raise awareness of the importance for people of all ages to consume diverse, nutritious and age-appropriate foods. Even though the focus is on women and children, men and the elderly were included as they are very influential in community and household decision-making.

To understand the current food security and nutrition situation, agrobiodiversity and nutrition-related assessments were conducted through various methods, including a baseline survey, two participatory research approaches for focus group discussions, and the development of a dietary monitoring tool to track seasonal changes in the diet.

Towards the end of the rainy season, I traveled to Chitipa District of northern Malawi and Luwingu District of northern Zambia to conduct focus group discussions on locally-available agrobiodiversity, its use in markets and diets, and food availability over the seasons. Food availability is highly seasonal and limited during the rainy season, which lasts from November to April in both northern Malawi and northern Zambia. While many crops are harvested and consumed in the dry season, there can be severe food shortages in the rainy season, exacerbating issues of food insecurity and nutrition. After the heavy rains, though, farms flourish with sunflowers, beans, cassava and maize growing on the hillsides of the Kameme and Lufita communities of Chitipa, Malawi, while cassava and maize production is lining the roads to Ibale and Ipusukilo, our project areas in the northern province of Zambia.

The discussions were held at the end of the rainy season because the heavy rains would have prevented the research team from travelling to the target communities. Reaching them is already difficult enough without the rains – in Zambia they are located approximately 10–12 hours by car from the capital city of Lusaka, and in Malawi they are approximately 9–10 hours from the capital, Lilongwe. The roads are difficult or even non-existent, and when traveling to the community of Ibale in the Northern Province of Zambia, we were required to drive down a footpath through the bush. 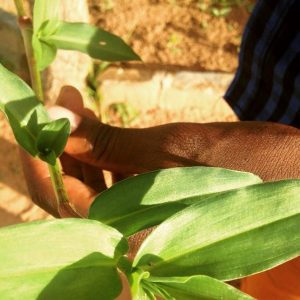 In order to gain an understanding of the local foods available and their contributions to the diet in different seasons, two methodologies were used for the focus group discussions – the four cell methodology (Raneri et al., 2017), and Seasonal Food Availability calendar discussions.

Although each focus group was able to identify more than 80 foods, it was apparent in both countries that the diet is dominated by just one: nsima/nshima. Referred to as nsima in Malawi, and nshima in Zambia, this hard porridge is most frequently made from milled maize flour and consumed with most meals using the hands to form a ball and dip it into a relish. The term ‘relish’ refers to any food, other than the nshima, that is consumed in small quantities. Similar to ketchup, the relish serves as a condiment since the quantity is not enough to constitute a side dish. This mono-diet was made apparent through data collection as well as observation, as even the lunch provided for the participants was refused if nshima was not included. Maize subsidies in both countries may encourage mono-crop production, but it is the cultural practices and behaviours that drive consumer demand and create an obsession over the mono-diet.

The four cell method for focus group discussions facilitates discussion on local agrobiodiversity in production, markets and diets, and sparked conversation about locally-produced foods such as beans, which are produced in communities like Kameme (Malawi) more as a cash crop than for consumption. In Ibale (Zambia), beans are rarely grown due to a lack of access to seed and fertilizer. Instead, people rely on an indigenous orchid tuber called cikanda as a cash crop. Also noted were reasons for the differences in production, marketing and consumption of the various foods, such as the belief of some communities that beans are for the poor.

The four cell sessions’ data revealed that despite there being a variety of foods, those most commonly consumed are staples such as maize, cassava and dark green leafy vegetables, although there are different species produced and consumed across communities. The prevalence of animal-source foods, legumes and fruit in the diet is low due to their low production and the preference to sell rather than consume them.

To complement the assessment of foods and local food systems in the communities, sessions on Seasonal Food Availability calendars were held to provide further insight. The information gathered was examined by food group to analyze the nutrients available throughout the year. Staple foods and dark green leafy vegetables are available for most of the year, although many households experience decreased availability during the rainy season. Dark green leafy vegetables are rich in micronutrients and increasing their year-round availability is a focus of the initiative.

Access to other vitamin-A rich foods (e.g. mango, papaya, orange sweet potato) fluctuates throughout the year; all communities reported very low availability of these foods except of mango, which is readily available during the rainy season (December–February or March). Bean availability differed by community – Ibale (Zambia) reported almost no bean production due to the inability to access inputs such as seeds and fertilizers, whereas Kameme (Malawi) community members produce a great deal of beans as a cash crop.

Although there are slight differences in food production and food preferences across the targeted communities, common trends can be identified to help guide nutrition interventions. Increasing availability of diverse, nutritious foods needs to go hand-in-hand with improving how they are used.

Encouraging consumption of foods such as beans, will allow households to benefit from improved nutrition and not only improved income. For example, creating recipes that are locally appropriate, enjoyable and nutritious may influence local people to consume more, rather than sell, the beans they produce. In addition, training communities on improved processing methods for preservation and storage can decrease food waste during times of high availability and allow greater access to foods with important nutrients during times of low availability. A nutrition education programme and materials are being developed and adapted to tackle nutrition issues from many sides – from improved processing and preservation methods to recipe development and improved food preparation and food safety.

This post originally appeared on the Bioversity International website. The study, by Bioversity International and partners, analyzes locally-available foods and preferences and uncovers opportunities to improve the quality and diversity of diets in the areas. It was carried out in partnership with the International Fund for Agricultural Development (IFAD), McGill University and WorldFish (CGIAR). This research is part of the CGIAR Research Program on Agriculture for Nutrition and Health (A4NH) and is supported by CGIAR Fund Donors.