An A4NH-supported partnership led by the International Institute of Tropical Agriculture (IITA) has honed aflatoxin biocontrol for sub-Saharan Africa (SSA) for more than 15 years. Recently, the team published a landmark journal article reporting a 10-year study on the efficacy of Aflasafe®, a registered biocontrol product for aflatoxin management in Nigeria. This is the longest-running, most extensive study on efficacy of any biocontrol product or management practice for aflatoxin alleviation. The study firmly establishes Aflasafe® as a vital tool in the fight against aflatoxins. 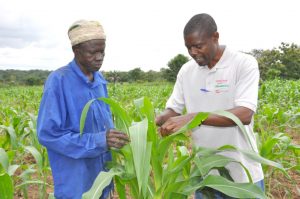 Scientist explaining to farmer on how aflasafe works on maize. Photo: IITA

Aflatoxin contamination of crops in SSA, especially maize and groundnut, is common. It has a profound negative impact on Sustainable Development Goals (SDGs) related to personal, social, economic, and national development opportunities.

The aflatoxin biocontrol technology employs a deceptively simple natural principle: Raising the proportion of Aspergillus flavus strains incapable of producing aflatoxins (called atoxigenic) in a field lowers aflatoxin accumulation in crops produced there. This biocontrol technology increases the frequency of native atoxigenic strains in the field before the aflatoxin-producers become established. This creates an aflatoxin-safe environment.

The biocontrol technology development process began with IITA scientists, together with United States Department of Agriculture – Agriculture Research Service and national partners collecting more than 4,000 A. flavus strains from crops and soil in Nigeria in 2003. Through a well-designed but laborious selection process, four safe, competitive, and widely distributed atoxigenic strains native to Nigeria were selected. These four strains serve as active ingredients of Aflasafe®, the first registered natural aflatoxin biocontrol product for Africa and third globally. So far, 12 Aflasafe products have been developed and registered for use in nine African nations. Each contains four atoxigenic A. flavus active ingredients native to the target nation.

These active ingredients are coated on roasted, sterile sorghum, which is spread in fields while crops are developing. When conditions are favorable, the active ingredients grow on the sorghum and spread across the crop to outcompete aflatoxin producers that would otherwise dominate the field. This results in less aflatoxin-producers which are displaced by the safe atoxigenic active ingredients. Treated fields contain significantly less aflatoxins—sometimes 100 percent less than nontreated crops. 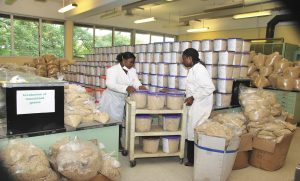 Staff packing aflasafe in containers for transport to Kano and Kaduna to control aflatoxin in maize and groundnut. Photo: R.Bandyopadhyay/IITA.

Biocontrol products can be commercialized only after the product is registered by regulatory authorities following mandatory extensive efficacy testing, safety evaluations, and demonstrated value in food/feed systems, and substantial interactions with regulators. Commercialization requires development of processes and infrastructure to produce the biocontrol product, development of tailored commercialization strategies, and technology transfer to appropriate manufacturing and distribution partners. The emphasis on registration and scaling-up biocontrol to improve food safety, increase income, and enhance trade has resulted in delayed publication of results of efficacy trials in peer-reviewed scientific journals. Lack of efficacy data in the public domain has caused ambiguous and sometimes negative perceptions about effectiveness, adoption, and sustainability of biocontrol in African contexts.

Publications of efficacy trials and large-scale biocontrol adoption are now emerging after building a solid base for large-scale biocontrol usage in several nations. In October 2019, scientists from the Aflasafe initiative published the longest-term study of any aflatoxin biocontrol product across the globe. The team reported on an extensive 10-year study that combined results of efficacy trials required for registration (two years) with data from both large-scale trials to demonstrate product value (two years), and commercial use by thousands of maize farmers (six years). The data from commercial usage came from aflatoxin analyses on more than 213,000 tons of maize harvested in 15 states in Nigeria by over 90,000 farmers who applied Aflasafe to their crops.

Nearly 95 percent of more than 7,000 grain samples, each representing 30-ton grain lots, from treated fields had less than 10 ppb of aflatoxins. “It was a massive effort to collect samples from thousands of places and  transport them to the lab, perform rapid aflatoxin analysis and microbiological/molecular tests, and report the results in a timely manner,” says Adebowale Akande, Manager of the AgResults Nigeria Aflasafe™ Challenge Project.

According to Ranajit Bandyopadhyay, the lead author of the Nigeria study, “The results show that biocontrol is a stable, effective aflatoxin management tool for crops grown by smallholder farmers. In addition, the study provides evidence of large-scale adoption of the biocontrol product in Nigeria.” The papers reporting efficacy of biocontrol in West Africa put to rest all doubts on efficacy, usefulness, and adoption of aflatoxin biocontrol for SSA nations.

“Very few peer-reviewed published studies have monitored efficacy of biocontrol products against plant diseases on a continuous basis over a long-time horizon. These classical studies were primarily in crown gall and tree disease settings. The Nigeria aflatoxin biocontrol study can be counted among them and, to the best of my knowledge, is the most extensive among field crops,” says Jürgen Kohl, a world renowned biocontrol specialist from Wageningen University & Research in the Netherlands.

In addition to the 10-year Nigeria study, other recent publications on efficacy of biocontrol products include those on groundnut and maize in Senegal, chili pepper in Nigeria, and maize and groundnut in Ghana. These Open Access peer-reviewed journal articles show the efficacy of biocontrol in multiple environments, during multiple years, in diverse cropping systems, under a variety of challenges that smallholder farmers face in SSA. More studies will soon be published reporting biocontrol efficacy in Ghana, Burkina Faso, The Gambia, Mozambique, Malawi, Zambia, Kenya, Tanzania, among other countries (Mali, Rwanda) where Aflasafe products are being tested.

The large-scale use of biocontrol as a centerpiece of holistic aflatoxin management programs has the potential to significantly reduce hunger, malnutrition, poverty, unrest, and economic underdevelopment. These major impacts can help meet several targets of many SDGs.