OVERLOOKED, UNDERUSED CROPS: AN ANSWER TO OUR FOOD SYSTEM PROBLEMS?

Jessica Raneri is a Nutrition Research Specialist with Bioversity International, working with A4NH. This piece was originally published by the Thompson Reuters Foundation.

A recent report from the UN Intergovernmental Panel on Climate Change rang alarm bells about the threat our global food supply faces from rising temperatures and changing climates. This threat becomes increasingly stark when one considers that three-quarters of the world’s food comes from just 12 plant and five animal species. More alarming yet, more than half the world’s food energy needs come from just three plant species.

Perplexingly, our heavy dependence on just a few crops isn’t by necessity: FAO estimates more than 5,500 food crops exist globally. Why aren’t we using them?

Globally, we are eating a smaller array of foods, resulting in diets that are less nutritious and healthy. Consumers, particularly the billions in low- and middle-income countries, have fewer foods available to them. And now we know that these foods, too, are under threat as the climate changes.

We have backed ourselves into a very vulnerable corner.

The problem is one of our own making: our primary focus, since the days of the Green Revolution, has been on ensuring there is enough food to feed the growing global population. This has resulted in heavy attention and investments into the yields of just a few crops, mainly cereals. While those efforts have been largely successful, they came at the expense of ensuring people have access to a diverse and high-quality diet that includes nutritious foods like fruits, vegetables, and nuts.

It’s not enough to ensure people have access to a certain number of calories. More than two billion people worldwide suffer from micronutrient deficiencies, meaning their diets lack critical vitamins and minerals necessary for health and growth. 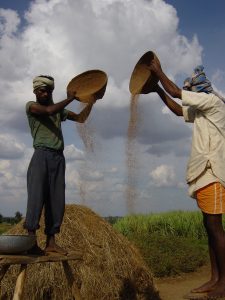 The reality is, our global food system faces two large and complicated threats simultaneously: climate change and insufficient nutrition. The reality also is, we have tools to address these threats.

One such tool is tapping into the potential of the other thousands of food crop species we haven’t paid enough attention to. For obvious reasons, these are known as Neglected and Underutilised Species (NUS). From minor millets in India and Chaya to Mayan spinach in Guatemala, these include wild, semi- or fully-domesticated field crops, trees, shrubs, vines, edible fungi, and even animal species. They often come from nutrient-dense food groups, and because they are indigenous to particular regions or areas, show resilience to some of the greatest threats of climate change, including extreme weather events, pests, and diseases.

No answer to problems as large and complex as climate and malnutrition will be easy, however. Returning these foods to the table will require addressing some persistent barriers in:

One of the greatest benefits to NUS is also a challenge: the potential to improve diets and build climate resiliency in the food supply at a more local level means research into them cannot use a one-size-fits-all approach. The priority species, production bottlenecks, and market constraints will vary. However, there will be lessons countries and regions can learn from one another through the process. Capacity building will include how to understand the value chain and local consumption preferences, and engage with farmers, market agents, and others. Success stories which we detail in the UN Standing Committee on Nutrition’s report, “Food Environments: Where People Meet the Food System” will be crucial for helping others gain insights into their own processes and projects.

It is often said that addressing enormous global challenges like climate change or malnutrition will require all the tools in the toolbox. These overlooked and underused crops give us a tool that can help fix both problems, if we are willing to invest our time, attention, and resources to doing so.