THE EAT-LANCET HEALTHY REFERENCE DIET: PERSPECTIVES FROM THE GLOBAL SOUTH

The EAT-Lancet recommendations on what a healthy reference diet that stays within Earth’s planetary boundaries should look like call for significant reductions in the consumption of animal-source foods and increased consumption of vegetables, fruits, whole grains and plant proteins. This has spurred debate not just because many lament the possible impact of such a diet to their beloved meat dishes, but also because some see a threat to livelihoods built around production of animal-source foods.

How can this be helpful when so many in the world are not meeting their protein and micronutrient requirements and so many children are stunted? Those familiar with malnutrition rates in the global south agree there is need to increase consumption of animal-source foods in those regions, especially for young children in need of nutrient-dense foods such as meat and eggs to meet their micronutrient needs and for healthy growth, especially considering the small quantities of foods they consume. Such a situation raises questions like:

While stunting for under-five-year-olds is low in North America and Europe, and it has been decreasing in other regions, it is still high in Africa, South Asia and Oceania (Figure 1) (GNR, 2018). The percentage of overweight children under five in Asia and Africa is relatively low.  It is rising in some countries and other regions like Latin America, where the double burden of malnutrition is evident, even at household level. The number of overweight children and adolescents between 5 and 19 years old is much higher and growing worse, having increased from 6 to 14.4 percent in Asia and 9.3 to 17.8 percent in Africa from 1999 to 2015 (GNR, 2018). 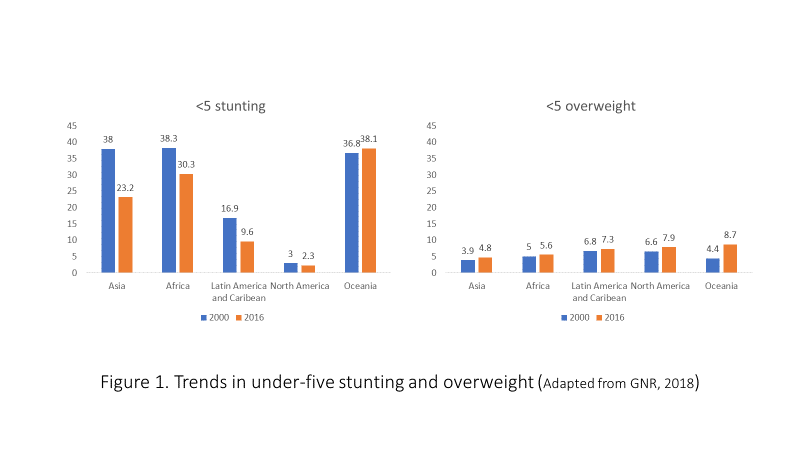 For adult women, there is a clear transition towards overweight in African and Asian populations, where there was a 10-percentage-point increase in prevalence from 1999 to 2015. Indeed, overweight prevalence in adult women in individual countries like Bangladesh (22.2 percent), Nepal (22.8 percent), Malawi (31.5 percent), Zambia (36.3 percent) and South Africa (65 percent) has reached levels considered high, yet such prevalence is also concurrent with a high prevalence of stunting, which on average is over 30 percent for Africa (GNR, 2018). In addition, the highest risks of dying from non-communicable diseases (NCDs) have been observed in low-income and middle-income countries, with sub-Saharan Africa and Central America being the worst affected (NCD Countdown 2030 collaborators, 2018). Some of these NCDs are diet related. This double burden of malnutrition (undernutrition and overweight/obesity linked NCDs) calls for holistic interventions that address the multiple forms of malnutrition simultaneously. Can the EAT-Lancet recommendations provide ways forward? Can the recommendations be contextualized for the global south, and if so, how?

What Would Contextualization of the EAT-Lancet Recommendations for the Global South Look Like?

If we take the United States and the Netherlands to represent the global north, and South Africa, India, Ethiopia and Zambia to represent the global south, a few observations can be made. Given that the United States, the Netherlands, India and South Africa have food-based dietary guidelines to promote healthy diets for their populations, and Ethiopia and Zambia are in the process of doing so, these are good places to look for opportunities for contextualization. As the Global Nutrition Report (GNR) 2018 country profiles show, with respect to the theoretical minimum risk exposure level, red meat consumption in the USA and the Netherlands is off the chart, with South Africa following just behind (Figure 2) (GNR, 2018), whereas India, Ethiopia, and Zambia have low levels of red meat consumption. The opportunity presented for contextualization in the latter countries lies in increasing red meat consumption just enough to meet nutrient requirements. This would offer various advantages. The first is that the negative health effects of very low levels of animal source food consumption by micronutrient deficient populations can be avoided. Second, it could be economically feasible for low-income populations in the global south to increase their animal source food consumption levels. Third, this would also be good for the environment in the long term, as these countries wouldn’t reach the high levels of consumption currently the case in the global north. Fourth, increasing existing livestock productivity could significantly limit the environmental impact of increased meat consumption. 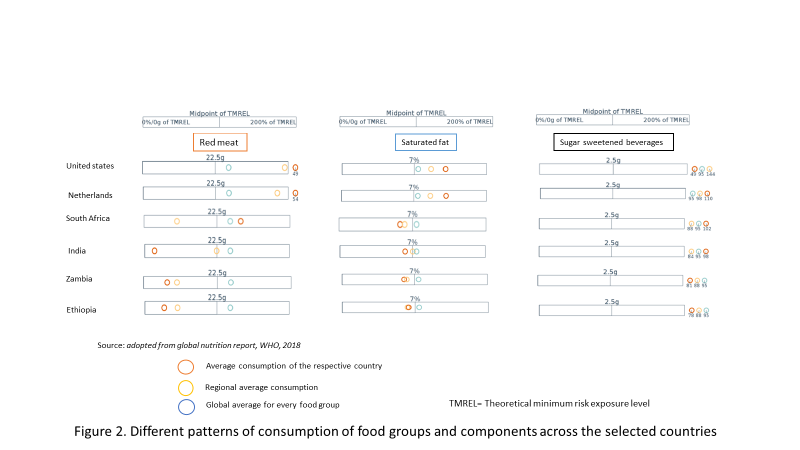 Consumption of some kinds of foods, such as legumes, seems to be better in the global south than north, (Figure 3) and this can and should be maintained. Populations in both the global south and north are equal offenders in their high consumption of sugar-sweetened beverages (Figure 2) and should reduce their intakes of these following the EAT-Lancet Healthy Reference Diet recommendations. 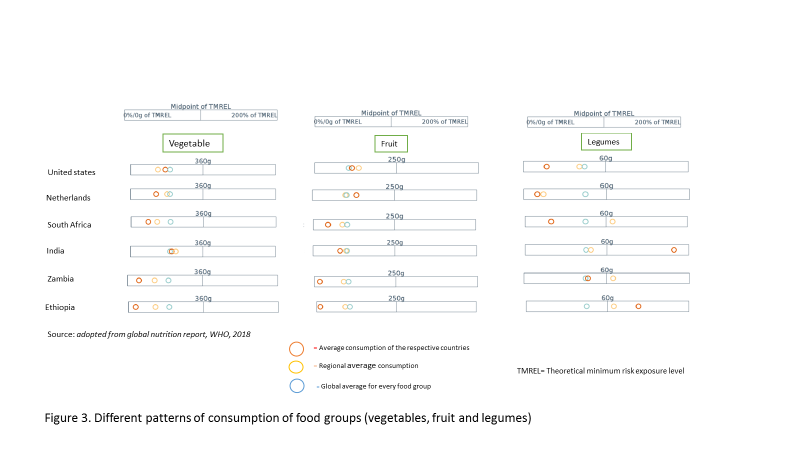 This suggests that it is indeed possible to contextualize the EAT-Lancet Reference Diet. In countries where food-based dietary guidelines are only now being developed, consideration should be given to contextualizing these recommendations. In general, agriculture and food systems must efficiently deliver a more diverse food basket that is accessible to the general population. Young children should get special attention to ensure their adequate consumption of animal-source or other nutrient-dense foods to meet their nutrient requirements. ‘Biofortification,’ which refers to breeding – by conventional methods – to improve the micronutrient density of key staples, can play an important role in cost-effectively increasing micronutrient availability in diets. This strategy stands to become increasingly important given the recent findings that increased CO2 levels can reduce the nutrient content of commonly consumed staples. Examples of such biofortified crops released in Africa include vitamin A cassava, maize and orange-fleshed sweet potato (OFSP), high iron beans, and pearl millet. Examples in Asia include iron pearl millet and zinc rice, and wheat, and in Latin America, high zinc maize, OFSP, and high iron beans.

How Can Agriculture and Food Systems Deliver on EAT-Lancet’s Healthy Reference Diet?

The proposed recommendations need to be adapted to different settings in Africa, Asia and Latin America to consider different production and consumption environments and economic realities, particularly concerning purchasing power. First and foremost, the yield potential of different staple grains and roots and tubers varies considerably depending on soil types and the amount and predictability of rainfall. A figure in the report showing the environmental impacts of different food crops per serving demonstrates that root and tuber crops rank low across all categories, but particularly in land and energy use.

One encouraging Africa-wide example that CGIAR centers are involved in, with HarvestPlus leadership, is the development of a new Nutrition Compact under the African Development Bank’s (AfDB’s) Technologies for African Agricultural Transformation initiative. This collaboration builds on CGIAR’s success in the development and delivery of biofortified crops and expands the scope to take these and other nutritious crops and food sources to scale and accelerate the utilization of technologies for improving diets in ways that are appropriate for specific country contexts. At the same time, we can take advantage of global technology advances and of comparative advantages across a broader set of food sources than are commonly available today. This is a growing and exciting field of research for the future and we believe that countries can score some early wins by buying into this AfDB initiative with nutrition outcomes in mind, as we know some have started doing.

Those working to improve diet quality in the global south are being called upon to critically explore how the EAT-Lancet Healthy Reference Diet recommendations could be contextualized for different regions and circumstances. This contextualization work may indeed offer ways to reach the recommended levels of animal source consumption for adults currently consuming too little animal source food, providing both health and long-term environmental benefits. Special attention must be paid to young children to ensure they get adequate nutrients for their optimal growth and development. Changes are needed in agriculture and food systems to deliver nutritious, diverse, and affordable food baskets for the world’s poorer populations.

Namukolo Covic is a Senior Research Coordinator with A4NH, based in Addis Ababa, Ethiopia. She coordinates A4NH research in Ethiopia. She will be speaking at 'Road Testing Healthy Diets: Perspectives from the Global South,' a side event at CFS's 46th session. Learn more about the event.