UNDERSTANDING WHAT IMPACTS LAST, AFTER THE PROJECT ENDS

Development projects set out to better understand and find ways to improve outcomes for people in less developed countries, whether they focus on agriculture, schooling, improving health, or other types of technology adoption. While a great deal of time and attention is spent designing and implementing interventions, surprisingly little is known about how long effects from development projects last or, indeed, much about what happens after projects end at all.

Our recently published paper, “Vitamin A Intakes Remain Higher Among Intervention Participants Three Years After a Biofortification Intervention in Mozambique," returned to villages that were included in Harvest Plus's Reaching End Users (REU) project three years after the project ended. The REU introduced biofortified orange sweet potatoes to households to grow, consume, and sell, and was successful in increasing vitamin A intake among targeted children and their mothers. The project ended in 2009 and no funding could be found to continue; as such, vine multiplication in the province declined dramatically. The gap in support gave us the chance to see what really lasted, based on what the communities learned and carried forward truly on their own. 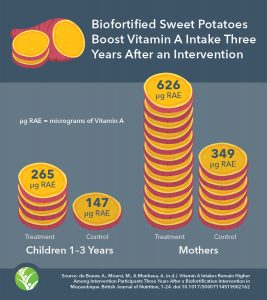 There is much we -- as researchers, donors, policymakers, and other stakeholders -- can learn about the work we do by following up on successful projects in this manner. Not only can we see what impacts lasted, how a community might still be benefiting, and how those benefits may have grown, but we can also learn lessons to improve our work going forward.

Alan de Brauw is a Senior Research Fellow in the Markets, Trade, and Institutions Division at the International Food Policy Research Institute.

Learn more from Harvest Plus about the findings from this paper.

Brief presents latest research evidence, implementation lessons learned on how biofortification can contribute to improved food systems and public health for all.

“Hidden hunger,” or micronutrient deficiency, affects a large section of the Indian population, as it does in many developing countries. Biofortified staples can help improve diets.

On May 23, HarvestPlus announced a major new commitment by the government of the United Kingdom to support research in biofortified