ETHIOPIA OFFERS LESSONS FROM STORIES OF CHANGE IN NUTRITION 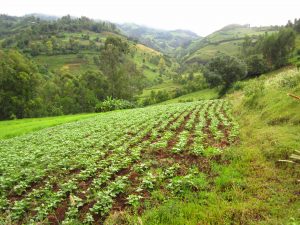 Ethiopia has made great strides in recent years in addressing nutrition problems that have long plagued the country: between 2000 and 2016, rates of stunting fell from 58 percent to 38 percent, one of the fastest rates in Sub-Sahara Africa, while wasting dropped from 12 percent to 10 percent. Yet in some areas, numbers remain stubbornly high reflecting important sub-national disparities. Based on the 2016 Demographic and Health Survey, in the Somali region, 23 percent of children under five years old were wasted, the highest rate in the country, while the stunting rates were lower than the national average at 27 percent; the Amhara region with the highest stunting rates at 46 percent had a 10 percent wasting prevalence, while the Addis Ababa region had the lowest rates at 15 and 4 percent for stunting and wasting, respectively. Women in the Amara region faced anemia rates of 59 percent – more than double the national average of 23 percent. This regional disparity needs closer scrutiny in the targeting of programs implemented to ensure that local context is adequately addressed to speed up progress in the high burden areas. For this reason, learning from experiences of implementers and communities is valuable.

The Stories of Change initiative was able to draw evidence from people involved in implementing multisectoral nutrition programming at zone, district (Woreda), village (Kebele), and community levels sharing their experiences. The “stories” of these experiences reflected the need to continuously and contextually address challenges on several fronts at each of the levels.  Coordination between and within the health and agriculture sectors at all levels is important to ensure adequate flow of information from the Federal level through to the community level and vise versa. Capacity to implement multisectoral, nutrition-sensitive interventions and programs is also constrained by high turnover of staff and limited logistical and financial resources. The ability of households in communities to act on the nutrition information received is challenged by limited livelihood opportunities, food insecurity, and limited access to markets and services.

Storytelling has an important role in human development: throughout history, as stories are handed down, one generation passes knowledge on to the next; children are able to learn from their parents instead of going out and repeating mistakes. This principle holds true in other situations, as well. For example, when addressing challenges in a multisectoral issue like malnutrition, learning can be exponentially more powerful when it comes not just from evidence like that found in published studies, but also from the stories people tell about their own experiences – with details that allow the listener to make greater connections, for easier remembering.

The Stories of Change in Nutrition initiative has built a resource base of experiential knowledge by exploring drivers of change in six countries that have had success in improving nutrition: Bangladesh, Ethiopia, Odisha in India, Nepal, Senegal, and Zambia. Through interviews and group discussions, researchers drew upon experiences and memories of stakeholders including policymakers, government officials, representatives from NGOs and the private sector as well as those living and working in the communities themselves, to tell structured stories of change in nutrition over time. This innovative initiative—through a growing number of policy briefs, consultations, and efforts to apply lessons learned in other countries—is shaping the global discussion on how to improve nutrition.

The Transform Nutrition consortium’s work in Ethiopia has contributed to strengthening the evidence base for nutrition from conception to 24 months of age, on efforts needed to reduce stunting and long-term cognitive impairment. Through the Stories of Change initiative, three overlapping ‘Stories’ emerged:

In a four-page brief detailing findings from the work, which was also highlighted in a special issue of Global Food Security focused on the Stories of Change initiative, researchers noted that the government’s commitment to ending undernutrition is clear, and the groundwork (i.e., the health and agriculture service delivery platforms) for doing so has been laid. While this is enough to see improvement in some places, in other communities, greater capacity strengthening is needed to accelerate progress. Drawing on successes thus far, researchers offered recommendations for next steps, including ways to support implementers, strengthen communications capabilities, and work with other sectors that touch on nutrition in their work.