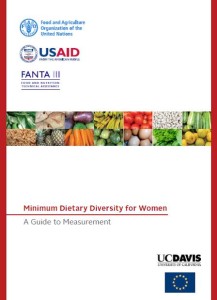 The Food and Agriculture Organization of the United Nations (FAO), with funding from the European Union, and the USAID-funded Food and Nutrition Technical Assistance III Project (FANTA) recently published a guide for measuring women’s dietary diversity titled, “Minimum Dietary Diversity for Women: A Guide to Measurement,” which provides users of the indicator with detailed guidance on its use and application, along with information on common-pitfalls.

Based on findings from WDDP-II, FANTA and FAO convened a consensus meeting in Washington D.C. on 15-16, July 2014 to select a simple proxy indicator for global use in assessing the micronutrient adequacy of women’s diets. Meeting participants from academia, international research institutes, and UN and donor agencies unanimously endorsed and support the use of the new indicator, called Minimum Dietary Diversity – Women (MDD-W).

To know more about FAO’s recent developments in nutrition assessment and in supporting countries to develop capacity in collecting national dietary information, please visit the FAO website. Frequently asked questions and additional resources related to the MDD-W are available on the FANTA website.

The new guide was co-authored by A4NH researcher, Gina Kennedy, Bioversity International, with key contributions from a range of other A4NH partners, including A4NH’s Flagship 4 leader, Marie Ruel, IFPRI. These contributors participated in consensus and technical meetings, reviewed former drafts, and offered input into the development of the MDD-W indicator itself.

**Read more about the development of the MDD-W indicator in a guest blogpost written by Marie Ruel on the Gender-Nutrition Idea Exchange (GNIE) blog in 2015.